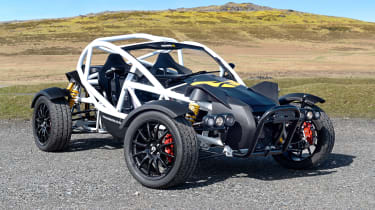 British lightweight sports car maker Ariel has revealed a new limited-build version of its Nomad off-roader called the Nomad R. Like its exoskeletal siblings, the Nomad features a tubular steel-frame chassis and Honda-sourced engine, but where the standard Nomad has been focused on bashing sand dunes (a common topographical feature in the UK, of course) the Nomad R has instead been set up in the fashion of a tarmac rally car.

Like all Ariels (Atom V8 aside) the Nomad R features a transversely mounted Honda engine sitting just inboard of the rear axle, but rather than utilising the larger K24 2.4-litre unit of the standard model (and the Honda CR-V), Ariel has swapped it out for the higher-revving K20Z3 2-litre unit fitted with an Eton-style twin-lobe supercharger running at 11 psi of boost. As such, the Ariel R produces 335bhp at 7600rpm, with a 243lb ft peak torque figure at 5500rpm. 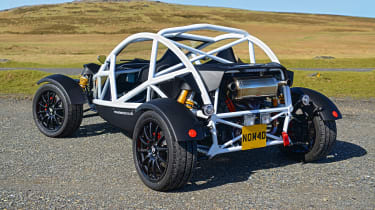 Power is sent to the rear wheels via a six-speed sequential transmission with an auto-blipping function on downshifts and straight-cut gears. This type of Sadev transmission has so far only been used in the Atom 3.5R and V8, but in the Nomad R it’s been upgraded to the latest ST82-17 model. The uprated driveshafts, four-piston Alcon brakes and 18-inch wheel and Yokohama AO52 tyre package are also specific to the Nomad R.

Performance is as extreme as its composite bodywork additions, reaching 60mph in 2.9sec and going on to a top speed of 121mph. 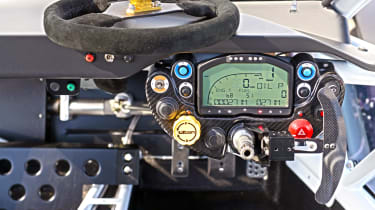 Despite its road-going focus, the Nomad has held on to its long-travel suspension, but has been upgraded with Bilstein MDS dampers adjustable for both compression and rebound,  and bespoke Eibach springs.

Inside, if you can call it inside, it shares the same composite seats as the latest Atom 4 with full five-point harnesses and a reduced aesthetic that comprises little more than a gear selector, steering wheel and pedals.

While the notion of a performance SUV is generally something that doesn’t sit well at evo, the Nomad has always stood as a rather poignant counterpoint. Ariel will only build five units priced at £77,400 including local charges, but it still sounds like a more sensible way to drop that kind of money than buying a BMW X3 M.