Can the Ariel Atom's philosophy translate into a vehicle capable of thrilling off-road? 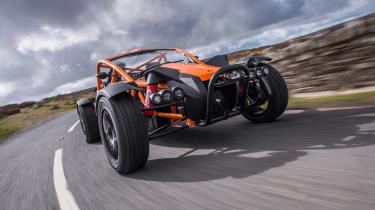 One of the most exuberant, fun-filled vehicles to be launched this year. Ariel has taken the spirit of the Atom and applied it to a car to traverse all surfaces, while retaining the Atom’s distinctive visual cues and lightweight ethos. We’ve now driven it both on-road and off, to bring you this full review.

The naturally aspirated four-cylinder over the back axle is a 2.4-litre, American-spec engine Honda engine – a ‘K24’ to be precise. It develops 235bhp, which is 10bhp down on the 2-litre naturally aspirated engine in the Atom. The greater displacement yields greater torque though, at 221lb ft.

The 0-60mph time is claimed as 3.4 seconds, which seems eminently feasible, at least on tarmac. The top speed is 134mph, but somehow that feels pretty irrelevant, especially as the tyre noise at 100mph is almost enough to stop you pushing on any further. 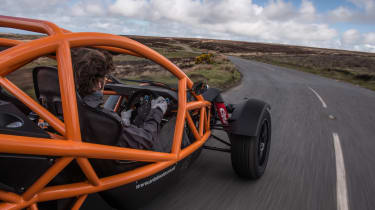 Ariel used CAD technology to design the Nomad, taking inspiration from the Atom but not slavishly copying it. A network of CNC-formed steel tubes forms the structure, to which double-wishbone and outboard (as opposed to the Atom's inboard) coil-sprung suspension is affixed, with 250mm of travel.

On the road, the Yokohama Geolander tyres generate far more grip than I was expecting, given their all-terrain tread. Despite this, turn in to corners can feel a little unnerving. After an impressive initial reaction to the first turn of the wheel, the car then leans into the suspension as loads increase, which inevitably makes it feel like the front end is running away from you a little.

But you learn to work with this, understanding how much speed you can carry, and in slower corners you quickly find that trail braking keeps the car loaded up nicely. The limit of the tyres is actually very progressive, and with enough throttle you can have the Nomad oversteering sweetly.

The engine doesn’t sound like the smoothest or most refined initially, but once the digital tacho is above 4000rpm, the tone changes and the engine feels like it’s into its stride. From here to 7000rpm is where you want to keep it, flicking up and down between the closely stacked ratios of that tight little H-pattern ’box to keep everything humming. If you do, you’re rewarded with a soundtrack that is the very essence of rorty.

There is a bit of squat under acceleration, but the dive under braking is far more noticeable because the nose pitches forwards between the front wheels, sniffing the tarmac. 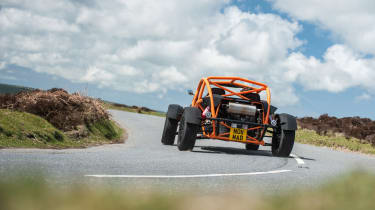 Ever since we first saw it, the idea of taking the wonderfully wild Nomad off-road has been tantalising. It just looked like it would be so much fun. But given that Ariel’s experience up to now has all been on the road or track with the Atom, there was always the chance that the reality of the Nomad amongst the rough stuff wouldn’t be quite so brilliant. Fortunately the engineers at Ariel have done a superb job.

I drove the Nomad at Walters Arena in South Wales on a mixture of fast gravel roads and muddier forest tracks and it was arguably the most fun I’ve had all year. The car’s set-up was biased towards the quicker fire road sections and felt superbly agile as a result. It is firmer than something like a true forest rally car but the result is greater feedback, which in turn inspires confidence if you’re not used to the glorious floaty feeling of driving on the loose. The downside is quite a lot of bump steer, but I think in this instance it is a price worth paying.

More than on the road you lean on the extra torque of the larger engine. This doesn’t mean you necessarily shift up earlier and avoid revving it out, just that you stay a gear higher in the corners. Off-road, the gearshift seems even more beautifully precise and snickety when juxtaposed with the bigger and lighter movements of the steering wheel.

With the weight balance as it is there was a fear that slides might get awfully big awfully quickly, but amazingly the Nomad is beautifully controllable, while still having the wonderful traction afforded by the engine being over the rear axle. Oversteer is both progressive and predictable so you can really play with the car at whatever angles you feel comfortable. As the pace increased so it was undoubtedly helpful to have the option of a slight tug on the upright hydraulic handbrake just to help the car get turned in to corners.

Finally, it’s worth mentioning how tough the Nomad felt. It coped with some big hits and although initially I winced, wondering whether the little Nomad would be able to handle the abuse, it soaked up everything I threw at it. In turn it threw mud at me, but I didn’t mind in the slightest.

At £33,000, the Ariel Nomad isn’t cheap. It is however good value, considering the fun factor and its ability to turn heads like a supercar. When you take into account that the 245bhp Atom starts at £30,572, and it’s more than possible to spend similar money on a Caterham Seven, the Nomad’s duality starts to make it look like a bargain.