Just what the world asked for: a Vauxhall Calibra that looks like an Aston Martin DB9 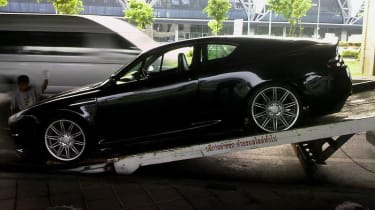 News has reached us here at Evo Towers about a car that by rights shouldn’t ever have made it past the ‘scribbled on a napkin’ stage. Here’s an Aston DB9 replica… based on a Vauxhall Calibra.  According to our source, this fake doesn’t look too bad to the untrained eye. To us, it looks like the result of some kind of major collision between a Volvo, a Nissan Skyline, a Peugeot 406 Coupe and the styling mods stand at your local Halfords. Notable by its absence in the above list is the Aston Martin DB9. A resounding fail, then?  Well, if you twist our arm, the rear lights are almost similar to the DB9. This, however, is juxtaposed with that unnecessary rear spoiler poking up from the bootlid. It resembles a Porsche 911’s ducktail more than it does a subtle Aston wing. We’d like to hear about your favourite (or least favourite) replica cars. Is the MR2-based 355 really the right shape? Is that Cobra up the road even close to the AC original? The Forum’s the place… Follow evo on Twitter or Facebook for latest car news and views