The 911 Sport Classic combined limited production with retro-look options, making it a one of the most highly collectable 997 variants 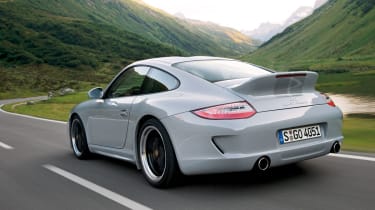 Porsche’s first attempt at a retro-look 911. The Sport Classic was launched in 2009, and with production limited to 250 units – is sold out quickly. Despite being based on a humble Carrera S, albeit with a huge number of options, Porsche charged a whopping £137,529 for the model – considerably more than the equivalent 997 Turbo.

There’s a lot that sets the Sport Classic apart from other 911s, most of which are the highly desirable cosmetic tweaks. New clock faces, a new gearlever, new seats and new door-cards certainly make the Sport Classic feel special, and there’s simply not the space here to list everything that has been covered in leather or re-trimmed to look and feel more appealing.

Painted in the unusually flat shade of Sport Classic Grey, and fitted with the ‘Ducktail’ rear spoiler, unique front lip and Fuchs-style retro alloy wheels, it does look absolutely fantastic. It also offers something no other 997 does, the wider C4S body with rear-wheel drive.

The Sport Classic is fitted as standard with the Sport chassis pack (optional on the Carrera) that brings different spring and damper rates, a 20mm reduction in ride height and a limited-slip differential. The standard power kit also brings an added 22bhp, taking the total to 402bhp.

Porsche has deliberately modified the drivers’ contact points. The seat is a different shape, and feels good, the aforementioned wheel is unavailable in any other Porsche and the gearlever is also unique to this model. The Sport chassis pack, and its resulting ride comfort, is a genuine surprise. The extra traction from the 305-section rear tyres is also noticeable, but then again the Sport Classic also reminds us how little the ordinary 997’s four-wheel-drive system contaminates its steering.

It goes well enough too, although it never feels that much quicker than a standard 380bhp Carrera S (the 0-62mph time is cut by just 0.1sec, to 4.6, and the top speed remains 188mph), but you do benefit from a much more appealing exhaust noise. It’s clearly been tuned to sound like an early ’70s ‘S’, and it partially succeeds. In keeping with the retro vibe, the Sport Classic can only be had with a manual six-speed gearbox (PDK isn’t offered), to which a standard-fit short-shift kit brings a more rewarding gearshift action. The ratios themselves, meanwhile, are well suited to the car’s power and torque curves. 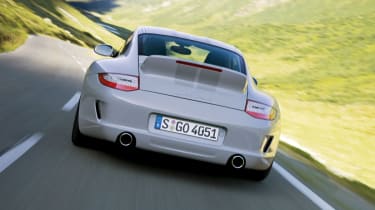 The carbon-ceramic brakes (also standard) are typical PCCB fare, lacking in initial bite but pretty fearsome after that, and if we’re being picky the car’s extra width might bring some traction benefits but it also makes the car less useable on tight British roads.

This being a 911 with an LSD, and with an empty, wet circuit at our disposal, it’s only natural that we do some slithering, but do you know what? Even though the car has a natural balance that marks it out as the most appealing ‘regular’ Carrera model, it somehow feels wrong to be arsing about in it. In the same way caning a beautifully prepared classic machine feels disrespectful, so does nailing the Sport Classic. Silly really – it responds very well to such treatment.

Not well objectively. Other rather more hardcore 997 models can now be had for less money, including the Turbo, GT3, GT3 RS and considering the £150,000 dealers are now asking for lightly used examples, there’s a lot of other choices on the table.

Thanks to the limited production run, and seemingly high demand however, the Sport Classic is much less likely to depreciate than other similarly aged 997 models... 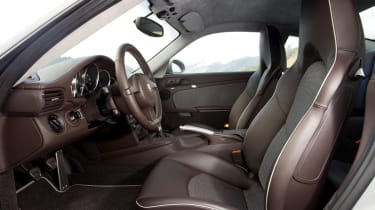 The attention to detail borders on the weird. By way of example, I offer you the leather-wrapped coat hook on the back of the front seats. The only people who will ever see this modification are the poor children squeezed into those little kidney-bowl rear seat squabs, or the few people who actually use those hooks. I don’t know what it costs to cover that weeny plastic prong with leather, but it must be a lot.