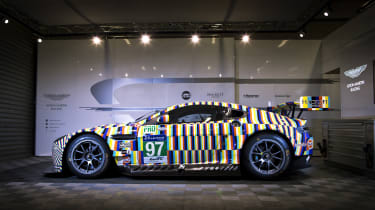 Aston Martin Racing’s number 97 Vantage GTE will race at this weekend’s 24 Hours of Le Mans in a brand new art car livery, having been revealed to the public at the race’s scrutineering earlier today. Designed by renowned abstract artist Tobias Rehberger, the brightly coloured car will be driven by Darren Turner, Stefan Mucke and Rob Bell.

Aston Martin Racing is fielding three cars in the 2015 race, but it was the owner of car 97 that commissioned Rehberger to decorate his racer. ‘My design for the car is rooted in my interest in distorted perception and related phenomena,’ explains the German artist. ‘In this case, the design is based on a geometric optical effect pattern. Comparable to a fast object, a steady fixation on a point of the pattern is impossible.’ 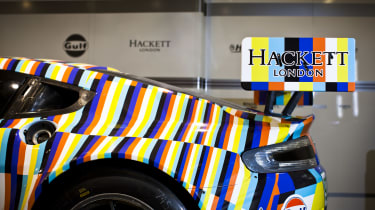 Competing in the GTE class of Le Mans, the eye-catching number 97 car will be up against Corvette Racing and its Corvette C7Rs, Porsche Team Manthey and its Porsche 911 RSRs and 2014 winners AF Corse's Ferrari 458 Italias.

Aston Martin Racing will be looking to improve substantially on its fifth place GTE finish from 2014 (though admittedly that did secure it LMGTE Am honours), with driver Darren Turner particularly upbeat after seeing his weapon for 2015.

‘Personally, I think art cars are fantastic,’ he said. ‘This design really pushes the boundaries of what’s been done before and challenges how we can use patterns and colours in race car liveries – I love it.’ 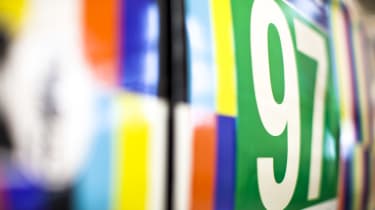 Striking as it is, the 2015 Vantage GTE isn’t the first racing car to sport artwork livery. BMW first raced its Alexander Caldas designed 3.0 CSL back in 1975, and has commissioned more than 16 art cars since. You can watch our video of when we met them here.

We’ll be covering the 24 Hours of Le Mans live from the circuit over the weekend, so be sure to keep an eye on evo.co.uk, Facebook and Twitter for our exclusive behind the scenes content.