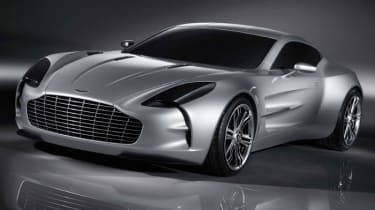 Here are the first official pictures of Aston Martin’s One-77 - 'the ultimate creative interpretation of the renowned British marque'. The super-exclusive, £1million+ car will only be available to 77 lucky owners seemingly unaffected by the credit crunch.  In fact, Aston have had a job turning people away – by the Paris motor show last month, over 100 people had tried to pop a deposit down for the most expensive Aston ever. The pictures are of the model that the company took to Paris, where they sneakily lifted bits of the cover to hint at what lay underneath. These images were taken afterwards and subsequently sent to prospective customers – and inevitably leaked out on to the net.

Although these low resolution images aren’t that detailed, we will be printing hi-res images in the magazine (on sale November 12) that hint at a pop-up rear spoiler integrated into the bootlid, grooved ceramic brake discs and deep side air intakes. We wondered if this meant the One-77 would feature SLR-style side exhausts, but closer inspection suggests the exhausts poke out from the rear diffuser.

The blacked out headlights show it’s not nearly road-ready just yet, although close inspection of the tyres suggests the 7.3-litre V12 machine will ride on 265/35 ZR20s at the front and 335/30 ZR20s at the back. They’ll still have their work cut out coping with the expected 700bhp+ output.

That’s about all we have at the moment – we expect the next pictures we see to hint at the interior design, which Aston promises will give buyers an unprecedented chance to personalise the car themselves. For £1.2 million we’d expect no less. 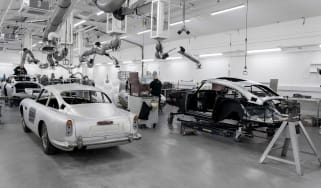 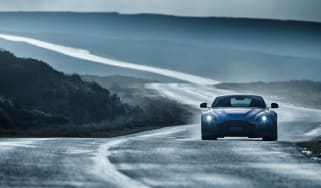