AM shows off its near production ready Rapide; 470bhp V12 from the DB9 coupe 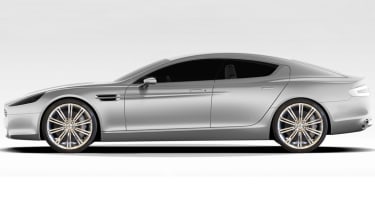 The Aston Martin Rapide is close to being production ready. Over three years after a concept for the four-door coupe was unveiled at the Detroit motor show, the Gaydon brand has announced firm details of the roadgoing Rapide.

It gets Aston’s tried and tested 6-litre V12, in the same tune as its DB9 coupe sibling. That means 470bhp and 443lb ft of torque sent to the rear wheels. The 1760kg DB9 hits 190mph and clears 0-60mph in 4.6sec; the bigger Rapide will likely be closer to two tons, but shouldn’t be too far off the pace and will still be more than up for the fight with rivals from Porsche, Maserati and Bentley.

The engine is mated to the company’s Touchtronic gearbox while the newcomer gets Aston Martin’s Vertical/Horizontal extruded aluminium underpinnings.

Despite the sporting concessions and Nurburgring-based development, Aston’s big talk around the Rapide focuses on the svelte styling and luxury interior. ‘We wanted to make the most beautiful four-door sports car in the world’ says Marek Reichman, Aston’s Director of Design. Whether he’s achieved it is a subject of opinion, of course, but looks-wise the Rapide sticks strikingly close to its concept and doesn’t stray from the brand’s current design language. Highlights include large-diameter, DBS-style wheels and swan-wing rear doors.

The latter rise up and out to reveal the car’s upmarket rear quarters, although Aston describes the back seats as suitable for ‘children or two adults on shorter journeys’. Our spy shots have shown the car is set to get a full-size, panoramic glass roof.

In a break with tradition the Rapide will be built by Magna Steyr in Graz, Austria. The plant currently builds BMW X3s and Chrysler 300Cs, with new vehicles on the horizon in the shape of Aston’s four-door, the next generation Boxster and Cayman, and the Mini Crossman. Aston promises a fully integrated team from the UK will work on production, while elements of the facility are modeled closely on the firm’s Gaydon plant.

The full production-spec Aston Martin Rapide will get its public debut later in the year. Customer deliveries start in early 2010, and prices are set to be higher than rivals at close to £150K.