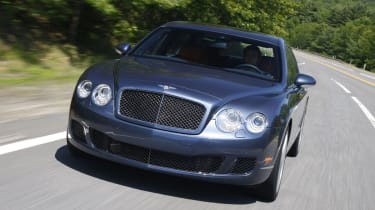 Bentley Continental Flying Spur Speed. It’s just about the most romantic name imaginable for a car. Bentley is a good start, bringing as it does overtones of everything that’s splendiferous and grand about being British. Then the scale of continents is conjured up before a link with aviation is thrown in, elevating the car and the sort of motoring you might do in it to a new and more exciting echelon. ‘Spur’ then selflessly adds the double whammy of sibilance and alliteration to the final word, which rounds out the quintet with allusions to perhaps the most desirable and fascinating facet of any automobile.

And why, precisely, am I waffling like this? Well, because the BCFSS, a car capable of 200mph and 0-60mph in 4.6sec, was launched in Boston, USA, on wide straight roads either clogged with rush-hour sloth or beset by traffic cops intent on enforcing ludicrous 45mph limits. So, whilst the new radar-based adaptive cruise control was amply tested, finding out about the driving dynamics of the Speed wasn’t easy. Welcome to evo – the thrill of wafting.

Fortunately the Speed’s interior is, of course, the best interior around for wafting, and not just because there are fans in the seats. Everything about the way it’s furnished is sumptuous, from the quilting in the leather to the organ-stop vent controls. Refinement for all new Flying Spurs has been improved too, with new ‘acoustic glazing’ making it all the easier to hear the new optional audio system designed by Naim.

The Speed also gets a new and slightly edgier three-spoke steering wheel and drilled alloy pedals, but as yet there’s no carbon-backed armchairs. The major differences come under the bonnet, where the 6-litre, twin-turbocharged W12 now produces a whopping 600bhp at 6000rpm and 553lb ft at 1750rpm, up 48bhp and 74lb ft respectively. This is all heard via a new sports exhaust with twin stainless-steel tailpipes, which produce a distant rumble like an elderly duke digesting a large lunch. The Speed also sits 10mm lower on its self-levelling air-suspension and has retuned spring and damper settings as well as thicker anti-roll bars. All of which combines with the sharper Servotronic power steering system to create a surprisingly fun car to drive.

I only know this because, by accident, photographer Dave Shepherd and I stumbled across one quiet piece of road with a couple of corners. The Spur’s long wheelbase and supple dynamics mean that, despite its size, it’s actually a very engaging car to hustle. I only managed two passes in front of Dave’s camera before we both started imagining the distant wail of sirens, but it was at least long enough to appreciate the fact that the ESP now has a ‘Dynamic Mode’ and that, just for fun, the Spur will oversteer quite satisfyingly (I know that’s pointless information, as no-one’s ever going to drive it like that, but it’s amusing that it’s possible).

All the test cars were fitted with gargantuan carbon-ceramic brakes – the largest on any production car – measuring 420mm at the front and 356mm at the rear. They needed one stop to get some heat and feel into them, but after that they did an impressive job of slowing 2475kg.

In fact, the only aspect of the car that still seems slightly unconvincing is the looks, which, despite a dark-chromed mesh and lower grille, seem a bit soft. Otherwise the Bentley Continental Flying Spur Speed does a fine job of living up to its name.