Aston Martin's Rapide supersaloon goes on sale. You better have been saving up, though 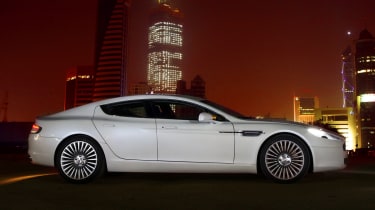 Aston Martin has priced its Rapide supersaloon. And it ain’t cheap – at £139,950 you could almost buy two of its keys rivals from the Jaguar XFR, Porsche Panamera and Maserati Quattroporte. Read a group test of them here. Even more interestingly, it’s nearly five grand more than a V12 Vantage, the current star of the Aston range and a popular car in our evo Car of the Year shootout. The Rapide does offer up a different kind of AM experience, though, with a brace of bucket seats in the rear and those back doors, too, making this the first practical Aston in a long time. The rear space isn’t overly generous, declining the Rapide any major chauffeuring work, but will suit adults on short to medium journeys and also make the car ample young family transport. Your £140K gets you a 470bhp, 442lb ft V12 engine, a six-speed Touchtronic auto gearbox, a posh Bang and Olufsen stereo, trick dual cast brakes and an adaptive damping system with a comfort mode and a sans-kids sport mode. Aston reckons it’ll build around 2000 Rapides in the first year of production, which will take place outside of the UK – a first for Aston – at the Magna Steyr plant in Graz, Austria. The car is expected to direct a bunch of new customers to Aston Martin. Click to read evo’s trip to a Rapide development drive in Kuwait See Henry Catchpole driving the V12 Vantage in North Wales Follow evo on Twitter for the latest fast car and supercar news