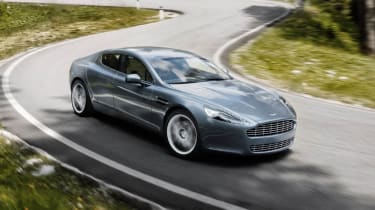 Aston Martin has finally shown the production version of its Rapide supersaloon. The four-door DB9 has been knocking around in concept and test mule form for a while, so its styling isn’t surprising, but that doesn’t stop it being a handsomely proportioned take on the Porsche Panamera and Maserati Quattroporte.

It’ll pack the V12 from the DB9 Coupe, with 470bhp and 443lb ft being sent to the rear wheels via Aston’s six-speed Touchtronic auto ‘box, specially tuned for the Rapide. The suspension is independent double wishbones all round, with the damping system from the Aston DBS, while there’s trick new dual cast brakes to help slow down the 1950kg saloon. A good thing, really, with the Rapide boasting a sub-supercar 5.1sec dash to 60mph.

While it’s a practical five-door car (the rear boasts a full hatchback), space is more along the lines of a generous 2+2, with the emphasis being on making the Rapide more of a drivers’ car than an executive taxi.

Aston chief Dr Ulrich Bez said that the Rapide is ‘the culmination of the Aston Martin range of sports cars, a car that seals the revival of a truly admired marque. There is now an Aston Martin for every taste and for every use. With Rapide, the entire family can enjoy their Aston Martin together in unison’. His point is proven quite nicely with one of the press shots on the right…

If you want a more in-depth technical insight into the new Aston Martin, click here to read our Rapide development drive in Kuwait.

Alternatively, click here to read about the rest of the goings on at Frankfurt. There’s a new Ferrari, Lamborghini and oodles of new Porsche 911s in there.