Like the sound of an Aston Martin Rapide shooting brake? Meet the Bertone Jet 2+2 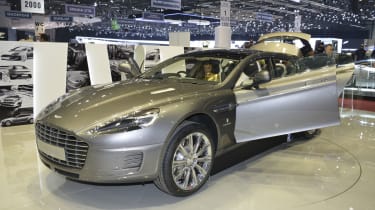 Italian coachbuilder Bertone has unveiled a one-off Aston Martin Rapide at the 2013 Geneva motor show. It has stretched a standard Rapide saloon and given it a hatchback to create a shooting brake version of the car, known as the Bertone Jet 2+2. Commissioned by an Aston Martin collector, who took part in much of the development and design of the project, the car is mechanically unchanged from the standard, outgoing Rapide it's based on - meaning 470bhp from the ubiquitous 5.9-litre V12 powering the rear wheels. (The new Aston Martin Rapide S uses a 550bhp, all-new V12).

Changes over the ‘normal’ Rapide include unique exterior paint and interior upholstery and trim. Bertone also claims that rear seat space and headroom have slightly increased (answering a criticism of the standard Rapide), thanks to the new shooting brake body style. The Jet 2+2 is a modern interpretation of the Aston Martin Jet 2, a Vanquish-based shooting brake from 2004, itself a homage to the 1960 Aston Martin DB4 GT Bertone Jet. This year also marks the 60-year anniversary of the link between Aston Martin and Bertone, one-off versions of the DB4/2 and DB4/2 cabriolet debuting in 1953.