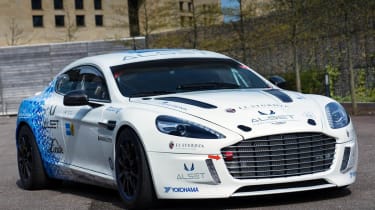 Headlining its bill is the hydrogen-powered Rapide revealed last month. Its 5.9-litre V12 – a twin-turbocharged version of the regular Aston Rapide’s engine - can run on pure hydrogen, pure petrol or a mix of the two; the former will see it run with zero emissions for its record-setting qualifying lap, while Aston tells us it will run a mixture during the race, rather than settling just for petrol.

The car carries 3.5kg of hydrogen in a pressurised tank, enough for two laps of the 16.12-mile combination of Nordschleife and Nurburgring GP circuit used for the N24. When the car pits, it will need to be refilled with hydrogen away from the pits to increase safety. The hydrogen Rapide will compete in the E1-XP experimental class with Aston boss Ulrich Bez among its driving team.

Aston’s other two racers will be a V12 Vantage GT3, with Le Mans racer Darren Turner its headline driver, and a near-production spec V12 Vantage, with evo’s Richard Meaden (something of a Ring veteran now) among its pilots.

The 2013 Nurburgring 24 hours run on May 18 and 19. evo.co.uk will have a race report and picture gallery afterwards.