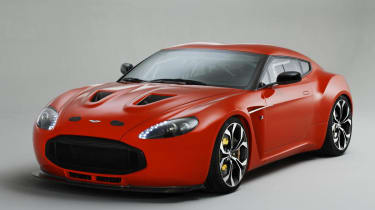 The Aston Martin V12 Zagato is going into production. We’ve already raced the car at the Nurburgring 24 hours, and from 2012, a limited run of 150 V12 Zagatos will be assembled at Aston’s Gaydon plant in the UK. It’s release is part of the celebrations for the 50th birthday of the iconic DB4GT Zagato, of which only 25 were produced, some of them competing in the Le Mans 24 hours. While the DB4 used a 314bhp 3.7-litre straight-six engine, the modern day Zagato is essentially an Aston Martin V12 Vantage underneath, so a 5.9-litre V12 engine producing 510bhp and 420lb ft drives the rear wheels.

It sends the Vantage to 190mph via a 4.4sec 0-60mph time. With the V12 Zagato’s handcrafted aluminium and carbonfibre body allowing it to boast a kerb weight around 100kg lighter than the V12 Vantage’s 1680kg, expect a 0-60mph-time closer to 4.0sec and a slightly taller top speed. And the price for a Zagato-badged combination of speed, rarity, handcrafting and a double bubble roof? A bargain £330,000 plus taxes - which translates to £396,000 in the UK. Click the pictures below to enlarge them Click here to read about the Aston V12 Zagato 24-hour racer