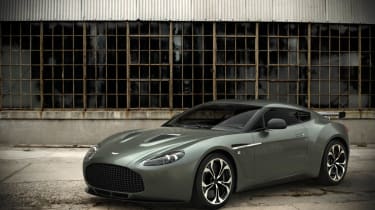 The production Aston Martin V12 Zagato has been revealed. The Zagato concept car picked up design awards while two racing versions completed the 2011 Nurburgring 24-hour race, one of which had evo’s Richard Meaden at the wheel. Alongside plenty of customer interest, it’s been enough to convince Aston to put the car into limited production. Based on the V12 Vantage – our favourite Aston Martin currently made – the Zagato uses its 5.9-litre V12 engine, which sends 510bhp and 420lb ft to the rear wheels. That’s enough to give the V12 Vantage a 4.4sec 0-60mph time and 190mph top speed, though the Zagato’s handcrafted aluminium and carbonfibre body should give it a kerb weight around 100kg lighter than its donor car’s 1680kg, boosting performance figures. After the Bugatti Veyron-bashing One-77, this is Aston Martin’s most exclusive car, with just 150 being built. There’s a suitably exclusive price tag too - £330,000 excluding local taxes means it’ll cost £396,000 in the UK once you add VAT. You could spec up a brand new Vantage, DB9 and Rapide for that…

Two versions of the Aston Martin V12 Zagato, including a Nurburgring racing version, will be on display at the 2011 Frankfurt motor show in September.

Do you like the new Zagato? Or is nearly £400K simply too much? Let us know on the evo Magazine Facebook page, Twitter feed or on the evo.co.uk forum