The V8 Vantage has received a big refresh, with an improved dynamic package, more power and a new 'Sportshift II' gearbox 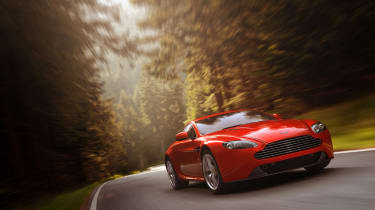 Following the official unveiling of the V12 Zagato in Kuwait, Aston Martin has revealed that it has given the Vantage range a heavy reworking - the car's biggest overhaul since 2008.

Starting from £84,995 the basic V8 Vantage models will receive a re-engineered 4.7-litre 420bhp engine, and many of the features previously available only in 'S' form.

The V8 still comes with a six-speed manual as standard, but the optional six-speed Sportshift gearbox has gone, replaced by a new seven-speed Sportshift II 'box - the extra cog helping to mix improved acceleration with all new levels of shift quality and refinement. This will also be combined with a Hill Start Assist system, for better control on steep inclines.

Dynamically, the Vantage has been substantially upgraded with quicker steering, thanks to a new steering column and modification to the power steering pump. Wider-profile tyres and larger six piston brake callipers complete the package.

Taking inspiration from the N400 and 'S' models, the front bumper has been re-styled to include larger air intakes and an aerodynamic splitter. A diffuser has been added at the rear, and to complete the package there are new sculpted side-mouldings, to give the car a more muscular look.

The 430bhp Vantage S gets the Sportshift II gearbox as standard, and is still the more driver-focussed choice. A new motorsport-derived aerodynamic styling package is offered, as well as a unique sports exhaust system.

Scheduled for a Geneva reveal, the new models will be available to order following the official announcement at the motor show.