The Aston Martin V12 Vantage S Roadster is the British company's fastest, most potent drop-top yet 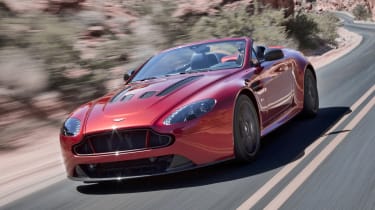 Aston Martin has announced its V12 Vantage S Roadster. It’s a natural spin-off of the V12 Vantage S coupe which impressed us so much last year; it finished fourth in our Car of the Year contest, ahead of the excellent Audi R8 V10 Plus.

With the same 565bhp 5.9-litre V12 at its heart, this new drop-top version instantly becomes Aston Martin’s quickest and most powerful roadster yet. Its 201mph top speed noses it ahead of the Ferrari 458 Spider, while 0-60 is ticked off in 3.9 seconds.

Aston is keen to extol the virtues of all its torque, too; its peak figure is 457lb ft, with more than 80 per cent of that (376lb ft) available from 1000rpm. Equally, the British company talks up the naturally aspirated engine’s racing DNA, with CNC machined combustion chambers and hollow cam shafts derived from motorsport advancements.

Its shift speeds – along with the car’s adaptive damping, power steering assistance levels and throttle response – can be adjusted via a selection of driving modes (dubbed Normal, Sport and Track) and a sport button. The raucousness of the Roadster’s exhaust – derived from the One-77 hypercar, we’re told – is also adjusted via the sports button.

The Roadster gets the same styling accoutrements as its hard-top sibling, with dark carbonfibre replacing the shiny aluminium details normally seen on Vantages, while the grille is inspired by the item on the bold Aston CC10 Speedster, bringing with it an improvement in air flow.

Aston Martin hasn’t yet priced the V12 Vantage S Roadster, but its forebear commanded a £15,000 premium over the coupe, so expect a figure around £153,000.