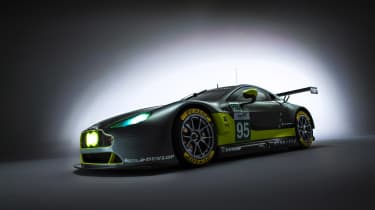 Aston Martin’s V8 Vantage and DB9 have become familiar sights on the racing scene over the past decade, but constant development under the skin has kept the name right at the top of the time sheets.

2016 should be little different, as Aston Martin has revealed its V8 Vantage GTE and V12 Vantage GT3 challengers.

The former will contest in the World Endurance Championship’s GTE Pro and GTE Am classes, with three cars in total. Equipped with Dunlop Sport Maxx GT racing tyres and supported by Total fuels, the firm will hope to add to its 23 victories in the series.

The new car boasts one of the largest diffusers we’ve ever seen on a vehicle, extending behind the car so far it looks as if Aston might have meant to drop a Lagonda Taraf body on top of its floorpan. The colour scheme is hard to miss too, with traditional British racing green contrasting with lime green accents.

Danes Nicki Thiim and Marco Sørensen and Brit Darren Turner will compete in the 95 car, while the second GTE Pro car, number 97, will be driven by Richie Stanaway from New Zealand, Jonny Adam from Britain and Brazilian driver, Fernando Rees.

While Aston Martin’s design language has changed little in recent years, there’ll be no missing the new V8 Vantage on the track – at least to cars following it.

Running the number 98, the sole GTE Am V8 Vantage will be run by Canadian, Paul Dalla Lana, along with Pedro Lamy and Mathias Lauda – Niki Lauda’s son. 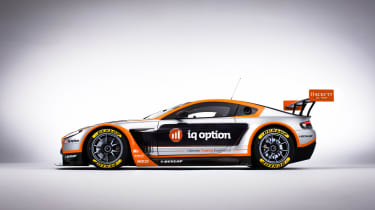 The new V12 Vantage GT3 has also made its debut, ahead of the team’s entry in the grueling 24 Hours of the Nurburgring. Both cars will run in the top SP9-class cars, and also wear Dunlop tyres.

‘Motorsport is a key part of Aston Martin’s DNA and it’s vital that we’re represented by such a strong line-up’, said Aston Martin’s head of global motorsports, David King.

‘We’re very much looking forward to our home race at Silverstone and the first opportunity to see the 2016 V8 Vantage GTE in competitive action’.