AMR’s new Vantage GTE, derived from the newly revealed Vantage road car, is set to compete in the 2018 WEC Championship. 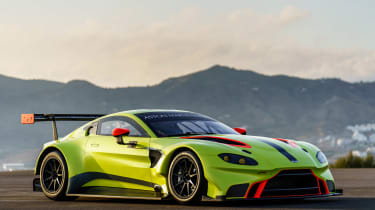 Aston Martin Racing has revealed its 2018 WEC championship contender, the all-new Vantage GTE. Developed in parallel with the new road-going Vantage, it’s hoped the new racing car will be able emulate the record breaking success of its predecessor, the most successful Aston Martin racing car ever.

As with the road car, the new AMR Vantage GTE utilises a 4-litre turbocharged V8 engine from AMG that replaces the current car’s naturally aspirated V8. Built on a lightweight aluminium chassis, the new race car will probably weigh in at somewhere around 1200kg and produce upwards of 500bhp as per the current GTE class regulations.

Designed under the stewardship of Chief Creative Officer Marek Reichman, the road-going Vantage’s aerodynamic features were easily modified to house the extreme appendages required in the design of a GTE Pro-class car. The track has been significantly widened compared to the road car’s and there is also a massive rear wing and rear diffuser combo at the rear. 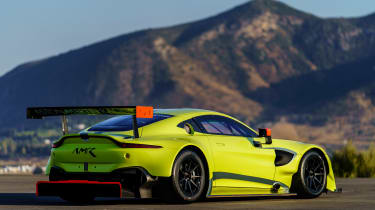 Development of the new Vantage GTE is already well underway, with the engineering team based at AMR’s Banbury HQ already having completed 13,000 development miles, including a 30-hour stint at the Navarra circuit in Spain.

> Click here for our story on the upcoming Aston Martin Vanquish

Satisfied with its progress so far, AMR Technical Director Dan Sayers said: “Attention to detail is infinitely better and we’ve moved forwards a long way in terms of mass versus stiffness and centre of gravity.”

Due to hit the track alongside established GTE Pro contenders from manufacturers like Porsche and Ferrari, the AMR Vantage GTE will also have to battle the all-new BMW M8 GTE, which, like the Aston, was developed alongside its production car relative. With the rivals due to hit the track for the first time at Spa in May next year, the 2018 GTE Pro Endurance championship should be an interesting one indeed.