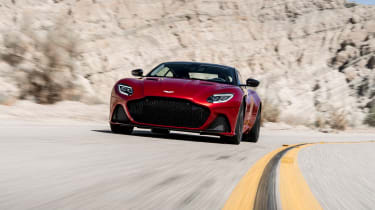 Aston Martin has announced another new model, continuing its strategy of launching a new car every nine months. Called the DBS Superleggera, the long awaited replacement for the Vanquish S will top the Aston Martin range, until the Valkyrie eventually arrives. This new V12-engined two-plus-two also marks the return of both the DBS and Superleggera names to Aston Martin stable, the former last seen in 2012, the latter first appearing in 1967.

Described as a ‘Super GT’ by Aston Martin, the DBS is based on the DB11 but only the glass house and doors are carried over untouched. The car’s aluminium and carbonfibre body is a further evolution of what Aston’s design team, led by Marek Reichman, have learnt since starting the DB11 project and reinventing Aston Martin’s design aesthetic.

The deep honeycomb front grille and single piece carbon clamshell bonnet not only deliver the aggressive looks, but the aerodynamic and cooling requirements of the 715bhp 5.2-litre V12 too.  Helped by an increase in width, the DBS is possibly the most successful interpretation of the company’s new design language yet. 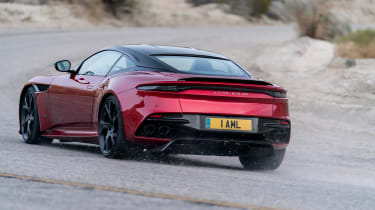 Aerodynamics play an instrumental role in how the DBS Superleggera looks. The deep front splitter and air dam combine to accelerate the airflow under the front of the car and onto the rear to deliver a genuine 180kg downforce figure - the highest ever produced by a production Aston Martin. At the same time, the intakes flanking that main grille are designed to feed cooling air to the 410mm carbon-ceramic front brakes, which are based on those fitted to the Vantage but have specific pistons and callipers developed for the DBS’s weight and performance. Deeper side strakes help draw more air through the arch and along the side of the car, reducing pressure and lift to improve high-speed stability. These aerodynamic features have been inspired by both the Vulcan hypercar and the new Vantage GTE race car

The rear of the DBS benefitting from improvements in airflow too, with a double diffuser and the latest version of the DB11’s Aeroblade (Aeroblade II), both key elements to the body’s upgraded aero performance. Unlike the DB11 it also features a fixed rear wing, this doesn’t increase drag but does contribute to the DBS Superleggera’s downforce numbers.

> Click here for our look at the Aston Martin Valkyrie

That 180kg of downforce is not the only big number the DBS carries, either. There may be no hardware changes to the twin-turbo V12 over the DB11, but Aston claims the engine was always held back in the latter to suit its GT nature. With the DBS specifically designed and developed to offer the supercar performance of the Vantage (and then some) with the GT credentials of the DB11, upgrades carried out on the V12 motor might be small in number but the results are anything but. 715bhp at 6500rpm and 664lb ft from 1800rpm through to 5000rpm is a substantial leap from the DB11’s 600bhp and 516lb ft. 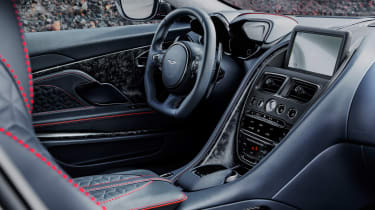 Driving through a new trans-axle eight-speed ZF automatic gearbox, the DBS is equipped with a carbon prop shaft and retains a mechanical limited-slip diff. The final drive ratio is as per the Vantage and goes a considerable way to explain its 3.4-second 0-62mph. The car runs on a 21-inch wheels with 265/35 and 305/30 Pirelli P Zero tyres that are bespoke to the DBS.

Despite all of the above, it’s what Aston Martin’s Matt Becker and his team have done to the DBS’s chassis that’s worth taking a closer look at. Double-wishbones remain at the front along with a multi-link set-up at the rear. But there’s a new, stiffer rear subframe and the car sits 5mm lower than a DB11, and naturally has its own geometry settings, too.

The engine mounts have also been revised to control the V12’s moving masses better and improve initial steering response, too. “We wanted the DBS to be more engaging and exciting than the DB11 and match the Vantage’s performance but without the need for the driver to be at their limits all the time” explained Becker at the car’s reveal. “In the end, the car we signed off not only met our first objective but we also have a car that is a step up on the Vantage in terms of driver feedback and outright performance – but a car that is also much more approachable no matter the driver’s ability than we perhaps first envisaged possible at the start of the car’s development.”

With a trio of driver modes to choose from, including switchable adaptive dampers, dynamic torque vectoring and a stability system that can be switched off in its entirety, the £225,000 DBS Superleggera appears, on paper at least, the most well rounded model of Aston Martin’s recent rejuvenation. Deliveries will start before the end of 2018 following the car’s July launch.