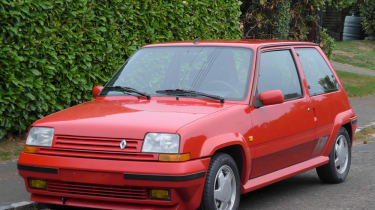 Winter isn’t many people’s chosen time to hunt for a new car, but with Classic Car Auctions’ December sale taking place on 1 December with several tidy ‘modern classic’ performance cars crossing the block, it might not be so bad after all.

There’s a strong selection of suitably evo 1980s and 1990s metal coming up for sale at the auction, particularly if you’re fond of German cars, with a long list of Mercedes-Benz and Porsches in particular, but Aston Martins, Jags, MGs and Triumphs also feature.

We’ve cast our net a little narrower, picking out one French fancy and a selection of dyed-in-the-wool affordable performance cars from hot hatchbacks to ‘exclusive’ coupes. You can find the full lot list on CCA’s website, while the auction itself takes place at The Warwickshire Event Centre.

Renault 5 GT Turbos were a darling of the 1990s and early 2000s tuner era, being small and relatively easy to modify for extra power. Unfortunately, that also thinned out their numbers somewhat from blown engines, crash damage and horrendous body kits, so the modern trend tends towards much more original cars. 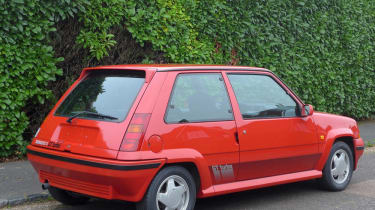 The ones that are left, like this Japanese-imported left-hand-drive example, are beginning to fetch strong money – £15k-£18k if this one reaches its estimate. It’s only covered 27,000 miles and while the history file is only partial, the rigours of Japanese car maintenance mean it should be fairly sound, and it has had a recent service, set of tyres and MOT.

Unlike the 5 GT Turbo above, M3s mostly avoided modification, though they’ve also long since surpassed the lowest point of their depreciation curve. Even so, £35k-£40k seems fairly sensible for this 1990 M3, and it’s enjoyed regular use with 121,000 miles on its odometer.

It’s also benefited from a £5000 repaint in 2016, as well as a braking system overhaul and a full service. While the E30 M3’s performance is no longer that spectacular by modern standards there’s certainly little wrong with the way it handles – hopefully the buyer will continue to add to that 121k-mile tally.

The rapid increase in values of old Porsches seems to have slowed a little recently. It’s still galling that a 911 SC Targa like this would have been half the £30k-£35k estimate just a few years ago, but when this car has recently had a £30,000 restoration, including a £10k engine rebuild, it looks like much better value. 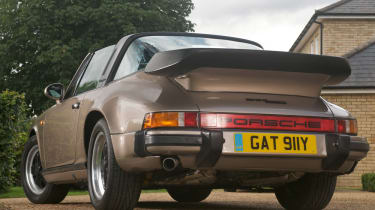 Targas are an acquired taste – as are whale tails, which this car has – but this SC has a manual gearbox attached to its 3-litre engine, and the removable Targa panel should make fair-weather driving a pleasure.

Is it just us, or does the third-generation Ford Capri look fantastic these days? The square-jawed lines, slight scowl to its headlights and long-bonnet proportions are a combination you don’t really see any more.

It’s fair to say Tickford’s aero kit doesn’t really improve the basic shape, looking a little heavy-handed from most angles, but what it loses in aesthetics it makes up for in aggression and retro cool. The 2.8-litre Cologne V6 gained a turbocharger for just over 200 horses, uprated brakes, Bilstein dampers and a limited-slip differential. Only 85 were ever made, and that rarity factor undoubtedly contributes towards the £18k-£22k estimate here.

If you’re not a Ford fan then you may well prefer the products of General Motors, so if the Capri above doesn’t snare your attention then you’ll probably be more interested in the Opel Manta GTE also selling in December’s auction. It’s more affordable, too, with an estimate of £6k-£8k. 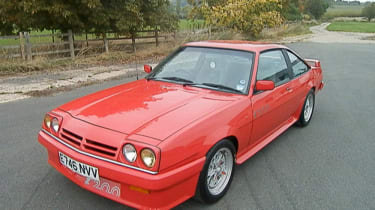 1988 was the last year of Manta production and GTEs got the most powerful 2-litre four-cylinder making 110bhp. In Exclusive trim, as with this example, it also got an Irmscher body kit, twin headlight units, a rear spoiler and a set of Recaro seats. This car also wears a three-spoke Irmscher steering wheel. It also has just two owners from new, and an MOT into the middle of next year.

From rear- to front-wheel drive now, with a humble but very smart example of the 8-valve Mk2 VW Golf GTI. It’s unusual seeing a five-door version, and even more so in Calypso Green.

Its condition is rated highly by CCA – 129 out of 135 – and it has a ‘huge’ history folder and a fresh MOT. An estimate of £10k-£12k seems relatively strong for one of these cars at the moment, though as CCA points out, the rising values of Mk1 GTIs mean Mk2s are now the focus for buyers on a lower budget, and that popularity is sure to push up prices. Hopefully, the next owner will still feel fit to add to the car’s 23,750 current miles.

As BMW steadily erodes its design reputations with X7s and droopy Z4s, clean examples of some of its past masters will only become more popular. For some that will involve snapping up tidy E36 3-series and E39 5-series examples, but for more exclusivity, cars like this E31 840Ci will always hold appeal. 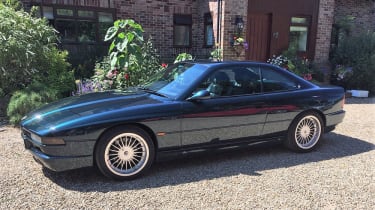 Estimated to sell for £8k-£10k, this 840Ci is presented in Sport trim, features a 4.4-litre V8, a five-speed automatic transmission and the tasteful combination of Oxford Green paintwork and Alpina multi-spoke alloy wheels. The yellow and black interior is more of an acquired taste but looks to be in good condition, while the MOT runs until May 2019.

We’re ending on a rally classic, and while £13k-£16k is more than one might have paid a few years ago for a tidy Quattro, with 141,500 miles under its wheels it’s a good opportunity to buy one that can be used and abused out of the box.

There’s also a classless quality to the Audi’s boxy lines, and in this black over brown combination (we’re quite fond of that interior trim, actually) even more so. It’d make quite a neat daily driver, without worrying too much about the sagging seat bolsters and with little concern about using it in inclement weather thanks to a respray two years ago. With 197bhp it’ll be plenty quick enough, too.