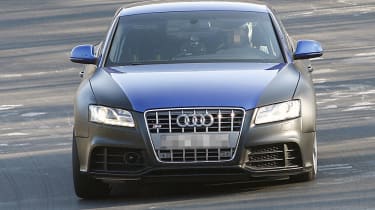 Except for the absence of the oval tailpipes – that would make it way too obvious – the car’s front skirt gives the model away as an RS. Once it goes on sale, the production model will be sporting wide, oval dual exhaust outlets – a signature of Audi’s RS series of cars. Although the car’s front gives it away as an RS5, it remains unclear what powerplant those air-intakes lead cooling to. However, sources indicate that the RS5 will be powered by the same twin-turbo V10 found in the Audi RS6 Avant. In RS6 guise, that powerplant is good for 580 horsepower. No word on when the RS5 will debut, but it looks as though the BMW M6 has been put on notice.