Ten years and eight victories on from its first Le Mans victory, Audi is desperate to win again. 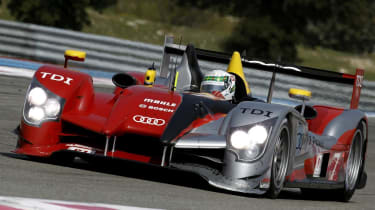 It's ten years since Audi first won at Le Mans, helping make them the most dominant force in sports car racing this century. With the petrol engined R8 taking the chequered flag five times (including a hat trick in 2000, 2001 and 2002) and the R10 TDI diesel adding three more to that tally (2006 through to 2008), the German firm has won eight of the previous ten 24 hour races at La Sarthe.

Bentley spoiled the party in 2003, but a bigger threat comes from current Le Mans champions Peugeot. The V12 powered 908 HDi FAP will be back this year, but in reply Audi has further tweaked the V10-powered R15 TDI. On the tenth anniversary of its first Le Mans victory, Audi is aiming to sweep all before it again.