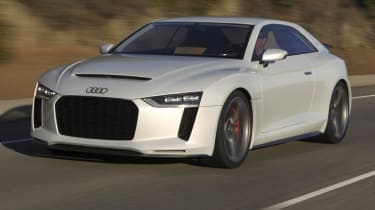 Just before Christmas evo was given the chance to drive the new Quattro Concept. It has a  400bhp in-line five-cylinder turbocharged engine from the TT RS, which makes all the right evocative Quattro noises, and the chassis is a shortened version of the one underpinning the RS5. Although you couldn’t accuse it of looking retro, there are definite nods to the original car in the strong wide C-pillar and the single vent offset on the bonnet. Inside it’s a similar story with a very clean, modern and very carbonfibre-biased look but with the MMI buttons moved to the instrument binnacle, which again reminds you of the original Quattro.
We drove the car on a closed piece of road called the Decker Canyon Road, which is just above Malibu in California. Thre’s no word yet on whether Audi will put the concept into production, but a decision should be made very soon – fingers crossed. For the moment, however, this is the only one in the world – hence why the LAPD kept a very close eye on proceedings, as you can see from the video…

For a full review of the car see evo issue 153