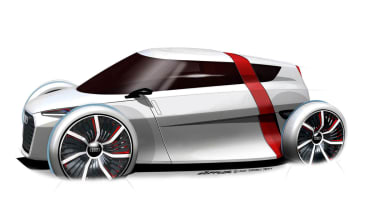 Audi has released teaser images of one of the cars it will be showing at the forthcoming Frankfurt motor show – the Audi Urban Concept.

The sketches show a small electric city car featuring what’s described as ‘1+1’ seating. There’s plenty of the the usual motorshow hype – Audi claims the Urban Concept is ‘combines elements of a racing car, a roadster, a fun car and an urban car’ – but behind that the concept is a clear indication Audi is seriously considering creating a small electric car to rival the recently shown BMW i3.

Technical details are sketchy. We know the concept ride on 21-inch wheels, it’s powered by two electric motors and that the passenger module is made from carbonfibre reinforced plastic to save weight. We’ll find out what it looks like for real on the Frankfurt show stand.