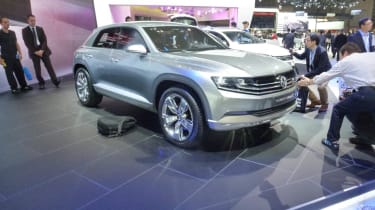 Despite the rarity of imported cars on its roads, Japan is still a sufficiently lucrative market for European manufacturers to ensure they turn up at the Tokyo motor show, but when they tend to bring production cars rather than concepts.

This year was pretty much par for the course. Although lots of the European players had booked stands, it was a bit of a struggle to find anything unfamiliar on them.

Credit to Volkswagen for bringing two new cars, one production and one very near to it. We’ve already given you the details on the Passat Alltrak – basically a poor man’s Audi Allroad – with raised ride height and some rugged body cladding. More surprising was the Cross Coupe, a smart-looking compact SUV that’s clearly near to reality – the show car had what appeared to be production metal stampings.

Audi brought the five-door A1 Sportback, together with a toe-curling video presentation of it playing football with some kids. Just be glad that your several thousand miles away. And BMW showed the new 5 ActiveHybrid, which is set to take America (and possibly Japan) by storm.