A realistic buy, quick, well- built and brilliantly usable, but against our other contenders can it offer the same thrills? 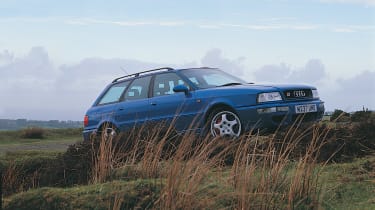 I was a little hesitant when a number of my colleagues nominated an RS2. Yes, it is a very, very cool car, but I feared that in this company it would feel a bit remote, a tad lifeless. However, my experience of the RS2 is limited to just a 15-minute drive two or three years ago. Now, with thick-rimmed three-spoke steering wheel in hand and turbocharged five-cylinder engine loping gently on idle, I have to say it feels a pretty special place to be.

The silver-faced speedo reads proudly up to 180mph, the red zone on the rev-counter doesn’t announce itself until after 7000rpm and the carbonfibre trim is a contemporary touch in an old-school dash. I’m warned by owner Jeremy Copp to expect old-school turbo lag, too. Sure enough the big five-cylinder motor seems lazy, almost unable to overcome its internal inertia until the turbocharger wakes up. And it really wakes up – from zero to hero in about one revolution. The business end of the delivery is post-3500rpm, and it feels at least as strong as its 315bhp claim.

Audi’s quattro system deals with the flood of torque with no fuss, but it takes time to make the RS2 flow. The steering is light – spookily so – and light on feel, and the turbo’s on-off delivery makes it tricky to keep everything on the boil through a corner. You turn in, feel a bit of understeer and then feed in the power. If you’re on the cusp of boost at the time, that mild understeer becomes severe. However, keep the boost in, or time it so that it arrives just after the apex, and the RS2 just hooks up and chomps on to the next straight.

In these wet conditions the RS2 is still a hugely effective ground-coverer. Manage the understeer, use the power wisely and it feels neat, tidy and devastatingly effective. However, this car’s dampers haven’t stood the test of time as well as some of the others here (having said that, it has covered 109,000 miles) and the constant jiggling and occasional crash sets the whole structure on edge, like a huge tuning-fork.

Barker was an RS2 advocate, but even he feels the big estate may be slightly out of its depth here: ‘The odo shows 109K, and disappointingly it feels it, with clonky suspension in particular. The clutch is heavy, the gearshift slightly vague, but underneath there’s a very secure all-wheel-drive chassis.’ Green feels the same. ‘No problem in terms of what it does, but it’s the least exciting car here, the least involving I suppose.’ Hayman, a man who hates understeer as much as no-smoking zones, is less charitable: ‘It’s a great tow car, isn’t it? Horribly dull, though.’