Bursting with character and genuinely rapid, in terms of pure entertainment the M5 is still the king of supersaloons 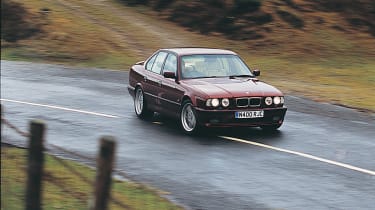 Standing water and driving rain means only one thing: I start in the M5. This is one of 50 run-out LE models, but is mechanically identical to any other six-speed 3.8-litre M5 (the M5 ran a 315bhp 3.6-litre straight-six up to ’92). And despite a notable lack of traction control or stability systems it’s a friendly, easygoing beast. Thank the long wheelbase, the wonderfully accurate throttle control and the supreme balance of the chassis – in these conditions it feels confident and composed.

But if the luxurious surroundings and long-legged stride of the M5 ease you into the treacherous conditions, the jagged howl of the 340bhp straight-six spurs you on to look beyond the big saloon’s ability to cosset. At first it feels a little lacking in torque. You fear that the sonorous, searing soundtrack is writing cheques that the engine can’t cash, but stick with it and use all of its l-o-n-g throttle travel and the big M5 starts to get serious.

At 4000rpm the 3.8-litre engine thumps you up the road on a rich seam of torque, and as the revs increase, the power builds and builds. Between 6000 and 7000rpm the engine is in the sweetest of sweet spots – and if that sounds fleeting, it isn’t; the M5 is very long geared (third stretches to 100mph) and you can savour the final metallic cacophony for what seems like an age. Keep the M5 singing over 4000rpm and it lives up to its supersaloon billing with ease.

In fact it’s even better than that. The E34 is smaller than equivalent modern four-doors and is almost 200kg lighter than the current M5. The way it keeps its 1650kg under control is simply stunning. The Boge electronic dampers that make up the ‘Nürburgring’ suspension package (standard on the LE, an option on other 3.8-litre M5s) have two settings, ‘S’ and ‘P’ (Sport and Performance). The latter is certainly firm, but the M5 always feels fluid and supple, never crashing or skipping over rapid-fire bumps, yet the body stays flat even when tucked hard into a turn.

There’s just a bit of understeer at the limit, and even when you deliberately provoke it the M5 seems happier to adopt small oversteer angles than mighty power-slides, but it’s immensely satisfying to use the saloon’s competence to good effect. As you get more committed to the throttle, so you learn that the M5 has enormous reserves of grip and seemingly limitless composure. It’s an astonishingly wieldy, nimble car. Only slow steering slightly spoils the picture, but you soon forget about that and revel in the engine’s response and the chassis’ remarkably tweakable balance. If the sign of a truly great chassis is its ability to adapt to the driver’s every whim, then the E34 M5 is from the top drawer.

It takes time to uncover this precise adjustability, though, to learn how to get the best from the big straight-six, but it’s worth the effort. It’s a car you have to show commitment to before it reveals its soul. It’s a car you could spend a great deal of time with and never get bored. Phwoar.