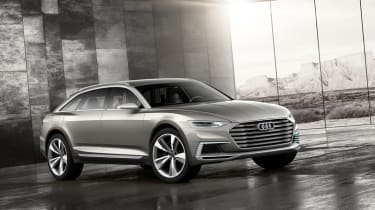 Audi has revealed its Prologue Allroad concept ahead of the Shanghai motor show. Created as a preview to a future A6 crossover, the latest Prologue features a 724bhp plug-in hybrid powertrain.

The Allroad is the third Prologue concept to be revealed by Audi, with coupe and Avant versions having arrived at the 2014 Los Angeles and 2015 Geneva motor shows. All three share the same overall design language, but the latest is the first to provide a glimpse of Audi’s future A6 Allroad. 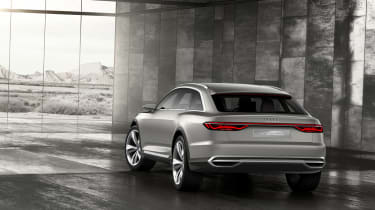 Designed with off-roading in mind, the Allroad sits 77mm higher and gains skid-plates, aluminium roof rails and cladding along the arches and skirts. Inside, the concept’s seats are swathed in brown leather, with dark ash veneer and aluminium trim featuring on the dash and doors. Like the Avant and coupe concepts before it, the Allroad also receives multiple digital displays.

Under the bonnet sits a twin-turbocharged 4-litre V8, developed with Porsche and set to replace the marque’s current 4.2-litre unit. It works with a brushless electric motor mounted within the Allroad’s eight-speed automatic gearbox, to produce a combined output of 724bhp and 664lb ft of torque. 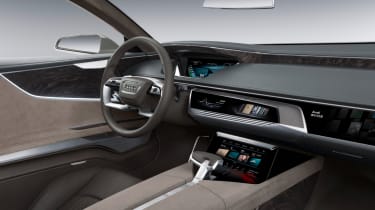 The electric motor’s 14.1 kWh lithium-ion battery can be charged wirelessly with induction technology, and is located under the boot floor to improve weight distribution.

In theory, the hybrid powertrain is capable of accelerating the Allroad from 0-62mph in 3.5sec, as well as producing a combined fuel consumption of 117.7mpg. It can also emit as little as 56g/km of CO2, and travel for 33.3 miles in full-electric mode.

Audi’s Prologue Allroad concept will make its global debut in Shanghai on 20 April. The car it previews, the A6 Allroad, is expected to arrive in 2017.