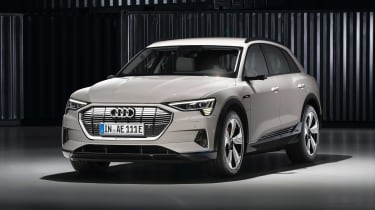 Audi has taken the covers off its first fully electric production car, the e-tron, at the Audi Summit in San Francisco. The new four-wheel drive, twin electric motor SUV will go head-to-head with the Tesla Model X, Jaguar I-Pace and the recently announced Mercedes-Benz EQC. On paper the new e-tron doesn’t stack up well when compared to these rivals, with a range of only 248.5 miles it won’t travel as far on a full charge as the EQC (279-mile range), the I-Pace (298-mile range) or the Model X (258-mile range).

Despite using relatively unfamiliar technology, Audi’s goal has been to engineer the e-tron to feel as much like its existing selection of cars as possible, with the same look and feel that has made the brand so successful in decent years.

Find out all you need to know about the new Audi E-tron, from its performance and drivetrain to its design and interior below. 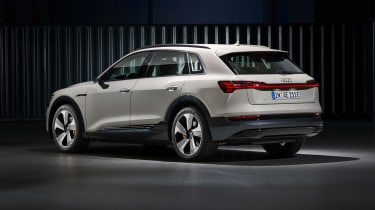 Rather than building a berserk-looking, super futuristic spaceship of a car, Audi wanted the E-tron to look almost conventional so that it seems like a logical step from any current family-friendly Audi to this new car, despite the significant difference in how it’s powered.

As such, the e-tron has a typical off-roader silhouette, a large octagonal grille (much like Audi’s range of SUVs), four prominent shoulders over each wheel like other quattro-equipped Audis to emphasize it is four-wheel drive, and a full-width, animated rear light strip - just like we’ve seen on the new A7 and Q8.

Like on all Audis there is a range of options that allow customers to make their cars more understated or distinctive, depending on their tastes. The lower half of the car and wheel arches can be in contrasting black or body colour, there’s a range of wheels from 19- to 22-inch in diameter and even the grey grille (made that colour to subtly differentiate the E-tron from petrol and diesel powered Audi SUVs) can be made black. 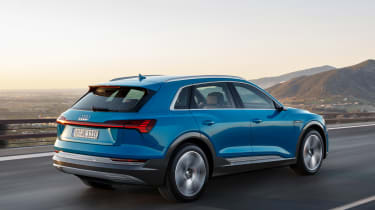 It’s the e-tron’s details that give it away as an electric car. The contrasting panel on the sill is to highlight that the batteries are located under the passenger compartment and the orange of the brake calipers and other highlights has been taken from the colour of the high-voltage cables in the engine bay.

Around the back, where you’d expect to see some exhaust pipes on a normal SUV, there’s a ribbed aluminium panel. Without it, designer Stephan Fahr-Becker, says the E-tron looks too plain and this little flourish draws your attention to the lack of exhaust pipes.

The e-tron is quite clearly an SUV rather than an Avant estate, thanks to its strong rear pillar, but it just isn’t that tall – at 1.61 meters high it’s 89mm lower than Audi’s low-roofed coupe SUV, the Q8. The e-tron’s short height has been dictated by aerodynamics and the need to keep the frontal area as small as possible rather than customer demand, most SUV customers want a car to look very big and imposing. 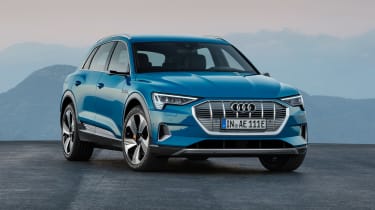 One element that isn’t so ordinary is the E-tron’s optional door-mounted cameras that replace the conventional mirrors. The small cameras record footage that’s then displayed onto OLED screens that sit towards the upper front side of the front doors. The cameras can be adjusted and you can zoom into the picture using the OLED panel’s touchscreen function.

These cameras are not just pointless gadgets, though; they can display a greater field of vision than ordinary mirrors helping to reduce blind spots. What’s more, their smaller size means the car is more aerodynamic and they extend the car’s range by 1.43 miles. Legislation in Europe allows the mirrors to be replaced by cameras, however whether they are legal in America is still pending so they won’t be available as an option Stateside just yet.

The e-tron is familiar Audi design inside, too. Despite the lack of transmission tunnel, as there is no propshaft running under the middle of the car, the layout is very conventional with two front seats and a bench for three passengers at the back.  Just like other modern Audis there’s also a central, twin-screen infotainment system and a virtual cockpit screen instead of traditional dials.

Other than the screens on the doors for cars equipped with the rear view camera option, the only major difference to the e-tron compared to other Audis is the fixed shifter platform. A static horizontal panel stretches over the centre console for you to rest your hand on; drive, reverse or park is then selected by a rocker switch that you use your thumb and forefinger to move. 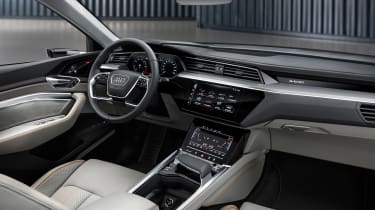 A set of, what look like, gearshift paddles can be found on the back of the steering wheel – odd considering the e-tron doesn’t have a gearbox. Instead, these paddles allow the driver to increase or decrease ‘engine braking’ once you start coasting. The right paddle increases the slowing down affect, while the left reduces it.

The E-tron has two electric motors positioned at either end of the car that each directly drive a separate axle. The two motors give an overall possible output of 402bhp (300kW) and 486.8lb ft or torque. The E-tron predominantly uses the rear axle for propulsion to save energy, but just like some other quattro Audis – ones with mechanical links between gearboxes and axles – the other axle is engaged when necessary to improve traction and agility.

What Audi has learnt over decades of making all-wheel drive road cars is all still applicable to the electric e-tron; when and where torque is sent is decided by the same parameters that control Audis equipped with ‘quattro ultra’ systems. Except, the e-tron’s quattro system can react faster (0.005sec from deciding to send torque to it reaching the road) than a purely mechanical system. In fact, Dr Andreas Klem, the technical programme manager for the e-tron, can’t think of anything that a mechanical quattro system does better.

All of the official performance figures for the e-tron are yet to be released, only its limited top speed of 155mph has been announced. However, Audi claims that the E-tron will accelerate from 0 to 62mph in less than 6sec – impressive considering the car will weigh just less than 2500kg.

The e-tron is a mainstream car, not a niche car for a few electric car fanatics, so it has had to meet all the same targets and objectives that Audi applies to all its models. Its performance has to be robust and repeatable so the E-tron has been built so that it can do 0-60mph times over and over again and it can run at its top speed for the entire charge of its battery.

This braking system means that the brake pedal isn’t connected to the hydraulic setup at all, it’s purely brake-by-wire. However, the pedal movement has been designed so that it operates and feels just like any other Audi, apparently. 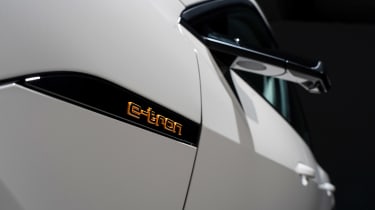 One of the benefits of keeping that big, distinctive Audi grille is that there’s plenty of space at the front of the E-tron to incorporate openings that direct air to the car’s range of radiators. Rather than not needing any sort of cooling because it doesn’t have an internal combustion engine, the e-tron uses conventional radiators to chill coolant that keeps the batteries and motors at an optimal temperature – 65 degrees centigrade and 35 to 45 degrees, respectively. If the outside temperature isn’t cool enough, the e-tron uses the car’s air conditioning condenser to cool the drivetrain and batteries.

The heat generated by the under floor batteries or motors can also be harvested to heat the cabin if needed, warm-up the motors, or get the batteries up to their ideal temperature. This complex heat management system has improved the e-tron’s range by 15 per cent.

The E-tron is shaped like an SUV partly because the market currently loves high-riding 4x4s, but the shape is advantageous for an electric car. With it being taller than a regular saloon or estate, there’s space to put large enough batteries in the floor, under the passenger compartment. Within the e-tron’s floor there are 36 modules made up of 12 lithium-ion cells each and, weighing 700kg, their position keeps the centre of gravity relatively low; 30 to 50mm lower than that of the Q5 and Q8. 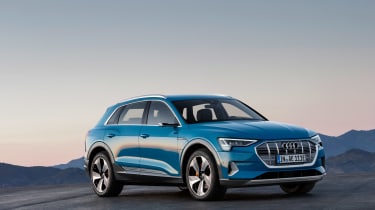 It’s not impossible to create an electric saloon car with batteries in the floor, as Tesla has proved with the Model S, but it can’t be done without making the car very wide. The e-tron is 39mm narrower than Tesla Model S.

Despite being an SUV, it’s a car that Audi’s chassis engineers have found relatively easy to set up, especially calibrating the car’s ESC. The weight distribution and low centre of gravity (for an SUV, anyway) has helped, so too has the electric motor’s ability to take over some of the traction control and ESC’s duties, rather than just the brakes. The motors can react fast enough to add our reduce torque by exact amounts at each axle, so the systems can more accurately control the car. There will be an ESC sport setting for drivers who would like more of their own control.

Unlike a petrol-powered car, where there’s already a vast and proven network that exists to keep it fueled, the e-tron will be launched into a world where there isn’t anywhere near the same support for electric vehicles. However, Audi as part of the VW Group has teamed up with Mercedes, BMW and Ford to create Ionity – a network of high-powered DC charging stations. By the end of this year there will be at least 200 Ionity stations, with an average of six charging points at each, all over Europe. By 2020 there will be double that.

At a 150kw Ionity station, the E-tron takes just 30 minutes to gain 80 per cent of its full battery charge from flat. It’s not so swift when charging at home, however; the standard 11kw mobile charger that comes with the car will take 8 and a half hours to fully juice up the e-tron. An optional 22kw charger, as it’s twice as powerful, takes half the time. 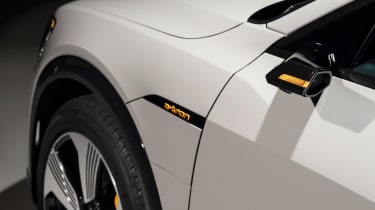 This optional charger also allows you to set how and when the e-tron is charged, too. If you only need the battery to have 60 per cent charge, you can select a time when it needs to be ready and when your electricity is cheapest, and the smart charger will make sure the car has your desired charge when you want it.

The E-tron’s standard charge point is located under a panel on the driver’s side of the car, no matter which side the steering wheel is on. It’s located just behind the front wheel and opens downward to reveal the plug socket. A second charge point, for just AC charging, located on the opposite side can be had as an option.