The concept of diesel sports cars received a major boost with Audi's recent announcement that its 2006 Le Mans challenger will be powered by a 650bhp direct-injection twin-turbo V12 diesel engine. 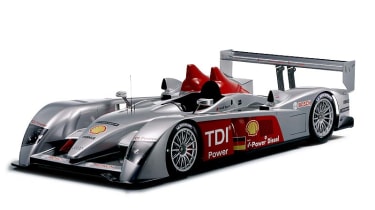 Called the R10, the car was launched last month in Paris, where seven-time Le Mans winner Tom Kristensen drove it from the Eiffel Tower to the other side of the Seine.

The 5.5-litre TDI powerplant develops 811lb ft of torque and its useful powerband lies between 3000 and 5000rpm. The biggest advantage of the engine is, of course, fuel economy. Audi reckons the R10 will get one or two more full laps of Le Mans from a tank of fuel than the petrol-powered R8. This advantage could well be extended further in the advent of a safety car or a wet race.

A racing sequential gearbox will be used instead of a DSG system, but the diesel engine does give the opportunity for fewer gears.

Perhaps in a bid to prevent any 'taxi' or 'truck' jibes before they're made, Audi has fitted the R10's exhaust system with particulate traps to cut down on smoke. At the launch event, the only time it was possible to distinguish a diesel clatter from the V12 was as it shut down - the rest of the time it sounded deep and revved aggressively.

Ironically, Kristensen said the most difficult thing about driving the R10 is the lack of engine noise. In third gear and above, the engine note is drowned out by wind noise, which makes for a very unusual and eerie driving experience, particularly in the case of oversteer where you would expect to be alerted by a flare of revs.

All Le Mans cars have to run on pump fuel, so Shell is providing a diesel version of Optimax for the R10. V-Power Diesel, as it's known in Europe, is currently only on sale in five countries, but when evo spoke to Shell's global vice president, Bruce Rosengarten, he said that it is spreading and should be in the UK within two years.

Based on Audi's supremely successful R8 - five Le Mans wins in the last six years and 77 starts without engine failure - the derv-drinking R10 features a longer wheelbase (comparable with an Audi Q7), in an effort to help the chassis cope with the heavier engine, and also gets wider front tyres.

Testing of the R10 is already underway, and the car has its first race at the Sebring 12 Hours in March before heading for the 24-hour French classic in June. It should be an interesting event because Porsche returns officially to Le Mans this year with its RS Spyder. The Spyder blew away its Le Mans Prototype 2 opposition in its debut race at Laguna Seca last October and was close to the pace of the LMP1 cars.

Audi isn't the first outfit to contemplate diesel power for Le Mans. In 2004, Taurus Motorsport ran a Lola-Caterpillar prototype, powered by a Mountune-prepared V10 based on the VW Touareg unit, producing 530bhp and 737lb ft of torque. The car was quick, economical and quiet, but didn't last the distance. Peugeot also has a turbodiesel-powered endurance racer in development, but that won't make its competition debut until 2007.