Audi A1, Audi A1 Sportback revised 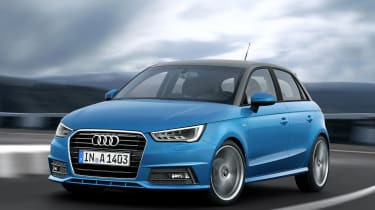 Customers will soon be able to order Audi’s revised A1 models and its sporty S1 and S1 Sportback, which hit dealerships in Spring 2015.

The entire A1 range benefits from subtle styling improvements and a collection of new and improved engines, set to boost performance and reduce fuel consumption and emissions.

At the heart of the new A1 range is a 1.0-litre 3-cylinder TFSI petrol engine, which recently made its debut in the Volkswagen Polo. Producing 94bhp it’s 6bhp more powerful than the 1.2 TFSI it replaces in the range, while CO2 emissions drop to 99g/km – equivalent to 66mpg.

Performance figures haven’t yet been revealed but as with other models in the revised A1 and A1 Sportback ranges, customers will be able to specify the model in SE and Sport trim lines. Opt for the refreshed 1.6 TDI, now capable of 82.7mpg and 92g/km, and S line trim also joins the party.

Other engines include two different 1.4 TFSI petrols. The 123bhp variant is available in Sport and S line trim levels, and Audi’s clever 148bhp ‘Cylinder On Demand’ 1.4 TSI is S line-only.

Sport and S line trim levels now come with standard Audi drive select, which allows the driver to choose between different damping characteristics (auto, dynamic and efficiency) as well as response from the engine and the optional S tronic dual-clutch transmission.

Of most interest to evo readers are the S1 and S1 Sportback – the latter of which we regarded highly enough to include in evo’s Car of the Year competition.

Each develops 228bhp and 272.9lb ft of torque, and puts it to the road through quattro permanent all-wheel drive. Audi claims a 0-62mph acceleration sprint of 5.8 seconds (5.9 for the Sportback) and a limited top speed of 155mph.

Interior ambience of all models is garnished with more chrome and gloss black detailing, new Alcantara and leather trim options and new upholstery colours. Alloy wheels, air conditioning, electric mirrors and a 6.5-inch retractable display are standard on all new A1 and A1 Sportbacks. Move up to S line trim and niceties such as xenon headlamps with LED daytime running lights, LED rear lights and 17in alloys are standard.