Audi’s most popular model to pick up design updates, but does without any major technical changes 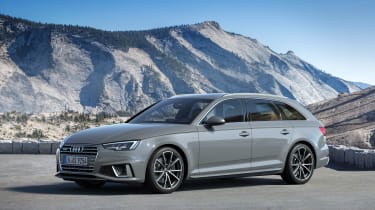 The Audi A4 saloon and avant have just been given a light aesthetic update, picking up some new design details and colour and trim options for the 2019 model year. The current B9 A4 was first launched in 2016, but with incoming all-new or updated rivals arriving in the next 12 months, Audi’s highest-selling model won’t have it all its own way.

On the sportier S-line trim, both the saloon and estate receive new front bumpers with distinctive U-shaped inserts on the outer intakes. The grille has also been subtly reshaped, stretching across to inform a sleeker, more acute angle beneath the main grille. SE and Sport models should also pick up the reshaped grille, but have less aggressive lower intakes.

> Click here for our review of the refreshed Mercedes-AMG C43

At the rear, the S-line’s previous round exhaust outlets have been replaced with trapezoidal tips, a feature becoming increasingly common within Audi’s line-up. Audi’s also added some new wheel designs, ranging in sizes between 17- and 19-inch. The colour range has also been updated. 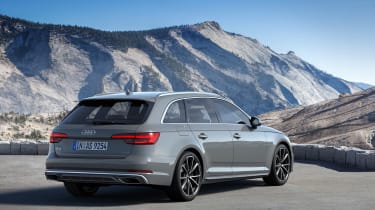 A widespread under-the-skin update, as recently seen on the Mercedes C-class, this is not, however. Rather than a full-on mid-life facelift (it’s a little early in the current A4’s model cycle for that), this is rather a gentle nip and tuck.

Inside, new leather colours and trim inlays will be available, but tech and interior convenience features will remain as they were. Audi’s typically slick and intuitive infotainment system also remains unchanged. This is not too much of an issue in the short-term, but it’s likely to be shown up by the updated interior tech of the new C-class, while the 3-series is likely to include BMW’s all-new iDrive 7.0 system when it arrives later this year.

Reaching customers later in 2018, the new A4 won't have it easy when its rivals are back at full strength.