Audi A5 Sportback goes on sale in UK

Audi confirms pricing for the all-new A5 Sportback and S5 variants; currently starts at £38,005 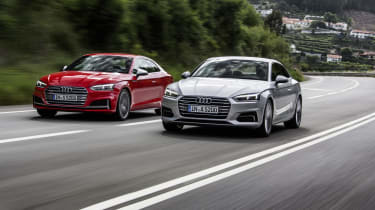 The new Audi A5 Sportback is now available to order in the UK, following the coupe's debut last month. The high-performance Audi S5 is also now available, in both Coupe and Sportback forms.

Distinguishing the latest models from their predecessors will be a job best reserved for the most ardent Audi aficionados, but the biggest differences are under the skin where the latest Sportback’s body is lighter than its predecessor and some models are up to 85kg less than the models they replace. 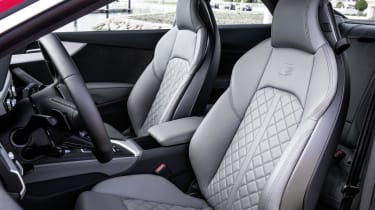 Engine choice in the regular A5 Sportback range is between two different outputs of 2.0 TFSI petrol, a 2.0 TDI, and two versions of Audi’s 3-litre, six-cylinder TDI unit.

The four-pot petrols produce 187bhp and 249bhp respectively, with 236lb ft and 273lb ft of torque. The quickest of the pair reaches 62mph in six seconds from rest.

A TDI Ultra version (£33,050 Coupe SE, Sportback TBC) increases the former figure to 68.9mpg and drops the latter to 108g/km, through the use of gear ratio alterations, low rolling resistance tyres and some bodywork tweaks.

Both six-cylinder diesels provide a compelling mix of performance and economy. The 215bhp model (from £39,725 as a Coupe Sport) develops 295lb ft of torque from 1250rpm and achieves up to 61.4mpg combined (on paper, at least), while the 282bhp model (price TBC, with 457lb ft of torque) has variable turbine geometry for quicker responses.

Front-wheel drive is standard, quattro all-wheel drive optional on selected models, and standard on the higher-output 3.0 TDI. Transmission choice varies from model to model, with six-speed manual, seven-speed dual-clutch and eight-speed tiptronic all on offer. 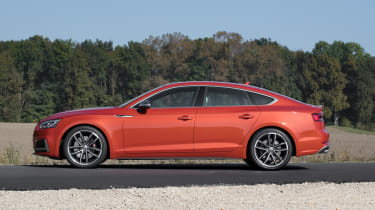 The S5 Sportback packs a turbocharged V6 petrol unit with 349bhp and 369lb ft of torque from as little as 1370rpm. Performance is suitably brisk: 62mph comes up in 4.7sec, and top speed is limited to 155mph. Quattro all-wheel drive is standard, as is an eight-speed tiptronic auto.

A sport differential helps distribute power between the rear wheels of the S5 Sportback, while specific S sport multi-link front and rear suspension keeps it pinned to the road.

Technology available in the A5 and S5 includes Audi's virtual cockpit instrument panel, Matrix LED headlights, a head-up display, and a Bang & Olufsen sound system. A suite of driver assistance systems will also be available.

Coupe models are already on sale and have been since September, while the Sportback will be available in dealerships from February 2017.