We've scooped Audi's A5 Sportback, after a dramatic chase in East Germany 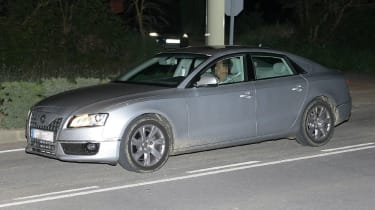 We now have the very first images of the Audi A5 Sportback, shot in East Germany after a dramatic race between the test driver and our photographer. The model is planned for September 2009 and will proceed with Audi’s aim to differentiate the A5 into a separate model family. Obviously, the A5 Sportback will not remain a two-door as the coupe, but rather a five-door configuration. The A5 Sportback will be equipped with bigger engines than the standard A5, such as the 4.2-litre V8, although, the most sporty version will be the RS 5, which is expected to debut in summer 2009.

Audi’s plan to catch sales and production up to BMW and Mercedes-Benz consists of enlarging the product range with 18 new models. That move will help the company reach one million vehicles sales in 2010 as those 18 new models will help push demand for the exotic niche models such as the Audi A5 Sportback. The A5 Sportback will be positioned right below the future A7.