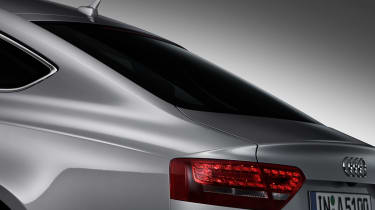 As is the fashion with unveiling new cars these days, Audi is being a tease with its new A5 Sportback. All the pictures we get of the official car for now are a rather zoomed-in shot of the rear (main pic) and a sketch of the final thing (right).

Fear not, though, as it will closely resemble the Audi Sportback concept that appeared back in January at the Detroit motor show (also pictured, right). And it’s set to be yet another premium German car that reckons it’s created a new segment.

In truth it’s a five-door coupe with similar luggage capacity to an A4 Avant but the taut looks and tapered roofline of the A5 Coupe, but that’s no bad thing. It should be pretty smart looking and offer Mercedes CLS-style for smaller money.

It has four seats and up to 980 litres of luggage space if you flip the rear pews down, while the proven range of engines from the A5 coupe are present and correct. There’ll be two petrols – a 208bhp 2-litre TFSI and 261bhp 3.2-litre V6 (complete with quattro awd) – and three diesels – 168bhp 2-litre, 187bhp 2.7-litre and 236bhp 3-litre V6 quattro. No word yet on if there’ll be an S5 Sportback, but with an S3 Sportback present in Audi’s range, it wouldn’t be a bad shout.

The usual array of Audi technology is available across the range too, with Drive Select and its varying chassis settings, adaptive shock absorber control, dynamic steering and a sport differential. The latter is only optional on the range-topping quattro cars, however.

UK sales start this autumn and while there's no pricing for us yet, things kick off at the equivalent of £30,500 in Europe. We're promised a cheaper version in the middle of 2010 that will make the Sportback the entry-level A5. If you’re excited to see the car in full, you can almost guarantee an appearance on Audi’s home turf at the Frankfurt motor show in September.