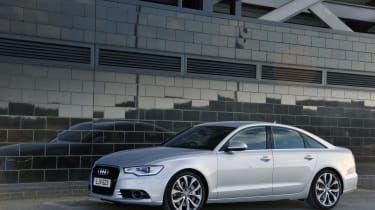 There are just two engines effectively, a four-cylinder 2.0-litre TDI unit and a V6 TDI of 3.0-litre capacity and two outputs. That 2.0-litre TDI is a huge seller, making up the majority of UK sales, its 187bhp and plentiful torque making it feel brisk even though it’s the economy champion in the line-up. It’s offered with either a six-speed manual (the only A6 to be offered with three pedals and a stick) or a seven-speed S tronic automatic. That S tronic not only adds a ratio, but drops the 0-62mph time, it being a twin-clutch design, which in all but a few rare instances is smooth and seamless in its shifts. Like its other installations that S tronic gearbox can get a bit flustered by any hesitancy and there's the odd clonk apparent too when shifting quickly between reverse and drive when parking. It’s something of an S tronic characteristic and does little to really detract from its appeal - we’d have it over the six-speed manual, if only to ensure the A6’s future resale value.

There 3.0 TDI models all come exclusively with the seven-speed S tronic gearbox, though the BiTDI comes with an eight-speed auto. quattro four-wheel drive is standard on all V6 TDIs - we'd recommend the 2.0 TDI if diesels are your thing.

quattro four-wheel drive is standard-fit on all versions of the Allroad (hence the name), and its engine options are limited to the 3.0 V6 TDI units in 268- and 315bhp-spec. You can't get the 2.0 TDI engine in the Allroad however, which, given that the Allroad is apparently bought by Audi’s highest net worth customers, is hardly an omission from the range - they can afford the bigger units.