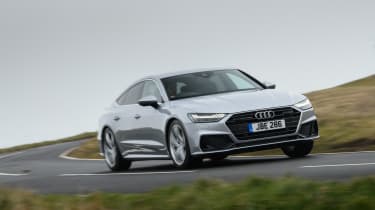 For all the A7 Sportback’s dynamic shortcomings it’s hard to imagine many owners being disappointed by the interior. In design, layout, construction and technology it’s probably the best in both its class and at its price point, and while the cabin of its Mercedes-Benz CLS rival feels a little more sumptuous and a little less po-faced, the A7 is ruthlessly well thought out and packed with cutting-edge tech.

That you’re staring at Audi’s Virtual Cockpit should be no surprise in a car this far up the range, but the A7 has also grabbed the double-touchscreen set-up from the larger A8 (now also implemented in the smaller A6) with configurable displays, smartphone-style controls and haptic feedback technology.

The latter is quite convincing, the vibrations being sent through the touchscreen doing a pretty good job of replicating the feel of pressing a physical button. The downside is that you still have to actually look where you’re pressing, since the screen gives you no more tactile feedback when prodding around unseen, but the 'buttons' are large enough that a rough stab usually gets the job done. Being able to pinch and swipe on maps or slide your finger fore and aft to adjust the temperature works well, too. 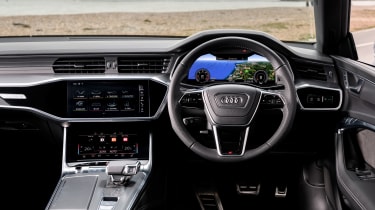 Elsewhere, the A7’s cabin continues to impress. The seats aren’t quite as comfortable as those in the A8 but there’s enough padding here, and enough adjustment, that longer journeys would be little hardship. There’s plenty of rear seat space, too (and despite the rakish roofline, getting in and out isn’t difficult) and when the body isn’t drumming away to itself over bumps, refinement is otherwise excellent – acoustic glass and slick aerodynamics mean wind noise is basically non-existent at motorway speeds.

Audi’s LED lighting technology is very impressive, too. We’ll leave the unlocking and locking animations up to you – it’s either fun or distastefully flashy depending on your point of view – but they undoubtedly give the A7 a unique look among its rivals. And the LED headlight technology itself remains a worthwhile feature, the matrix LEDs of S Line models even more so. GPS guidance adjusts the beam pattern depending on the road you’re on, and the high beams pull the neat trick of adjusting around oncoming vehicles, to maximise your visibility without dazzling other traffic.