Here’s where the A7 Sportback’s shine begins to dull. Dull being the operative word here, since neither petrol nor diesel A7 is particularly entertaining to drive.

It starts with the steering, which feels slightly slow to respond around the straight ahead. Good for stability at high speeds on the Autobahn, but less desirable on twistier roads. While matters improve as you wind on more lock and the rack is always consistent, your fingers won’t be blessed with any feedback, so directing the A7 is more administrative duty than pleasurable activity.

We’ve also significant misgivings about the A7’s ride quality. Having tried cars on both conventional steel springs and the optional air suspension set-up, neither is as pliant as say, a Mercedes-Benz CLS, and both seem to induce a drumming resonance through the expansive interior that harms the A7’s otherwise very impressive levels of refinement.

Of the two set-ups we’d suggest saving your money and opting for conventional springs. The air suspension might give you a greater range of suspension compliance and body control, but it’s further behind the conventional set-up at its worst (juddering over sudden and high-frequency bumps) and it is ahead at its best (pliancy and body control at higher speeds). 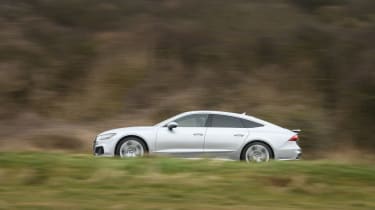 You can also give the dynamic all-wheel steering a miss. While it pays dividends at lower speeds, cutting around a metre from the A7’s turning circle, it doesn’t seem to offer a great deal more agility in other situations.

The new Sportback is undoubtedly competent, offering plenty of grip and stability to its driver, predictable responses and, on smoother roads, class-leading refinement, but its basic dynamic set-up is an unhappy compromise, neither comfortable enough to be a luxury car nor entertaining enough to be a sporty one.