Two drivetrains are currently available in the A7 Sportback. Both feature three-litre engines, both are V6, and both use Audi’s quattro all-wheel-drive technology, but from there the two differ.

One is a diesel, badged 50 TDI quattro and developing 282bhp between 3500rpm and 4000rpm and a brawny 457lb ft of torque spread between 2250rpm and 3000rpm. Diesel models are equipped with an eight-speed tiptronic automatic transmission and conventional quattro permanent all-wheel drive with a self-locking, electronically controlled centre differential. In Dynamic mode the diff sends more torque to the rear wheels – up to 85 per cent in the most extreme cases.

The other is petrol. This carries 55 TFSI quattro badging (nope, we’re still unconvinced by Audi’s latest naming strategy) and produces its 335bhp maximum power output from 5000rpm to 6400rpm. Its 369lb ft torque output might be less mighty than the diesel’s, but petrol drivers do get the benefit of it being delivered from just 1370rpm, all the way to 4500rpm. It uses a seven-speed dual-clutch 'S tronic' transmission.

It too features quattro all-wheel drive, but not the same system as the diesel. Audi bills it 'quattro Ultra' technology. This is primarily implemented for efficiency (Audi’s 'Ultra' tag first appeared on its hybrid Le Mans racers), and features a multi-plate clutch centre differential with the ability to decouple drive to the rear axle. This makes the 55 TFSI front-wheel drive in most conditions, with the ability to call upon the rear axle when necessary. Responses here can again be adjusted using Audi’s drive select system. 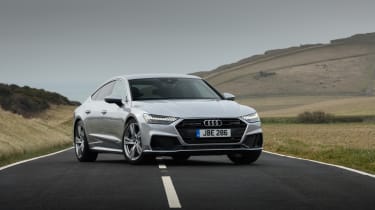 Another feature of both cars is 48V mild hybrid technology. As part of a 48V electrical system (with a lithium-ion battery in the boot) the A7 Sportback uses a belt-driven alternator starter for quick and efficient starting, and to re-start the engine following periods of engine-off, decoupled-drive coasting. It’s also capable of recuperating energy during deceleration, while a conventional pinion starter is included for cold-start situations.