Audi's new A8 supersaloon is here, with big torque and much tech 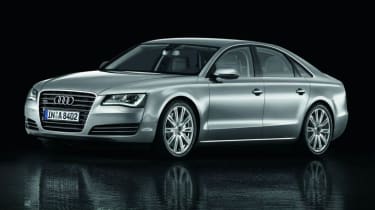 Audi created its own motor show last night for the launch of the new A8. With so much razzmatazz going on I was expecting this to be a revolutionary new Audi model but when it finally arrived on stage, it was more a case of evolution than revolution. This new A8 brings together all of Audi’s latest technology it’s been developing recently in order to reduce a car’s CO2 significantly and the result with the new A8 is an impressive average 20 per cent reduction in carbon outputs over the previous generation A8. Audi confirmed four different models last night, a 367bhp, 328lb ft 4.2-litre FSI Quattro, the 345bhp, 590lb ft (!) 4.2-litre TDI Quattro, a 247bhp, 406lb ft 3-litre TDI Quattro and, arriving later in 2010, a 201bhp 3-litre TDI with front-wheel drive only.  All models come with the new 8-speed tiptronic transmission, while the 4.2 TDI has the Quattro Sport rear differential (as used on the S4/S5) as standard, giving a rear bias to the handling. The 4.2 TDI is the fastest A8 boasting a 0-62mph time of just 5.4sec. All models come with a limited 155mph top speed. Other technical highlights include a class leading drag coefficient value of 0.26 Cd, advanced LED headlights, stop-start (on 3.0 TDI only) and camera controlled lights and cruise control. Audi has made this new A8 both longer and wider than the previous car, while the roofline is actually lower than before so the overall effect is to give the new A8 a more coupe-like appearance than the old car and makes the new A8 the largest car in its class.  This extra length has allowed Audi to make the cabin (especially in the rear) a more luxurious place to be and the interior of the new A8 is probably the new car’s star quality. The quality of materials has gone up to Bentley levels of luxury, with beautifully machined wood and class-leading switchgear laid out throughout the interior. This new A8 introduces a new touchpad interface for the MMI system that works just like the mouse-pad on your laptop and this will become standard equipment throughout the Audi range next year. But it’s not all good news, with all this talk of how important weight reduction is going to be in the future I was surprised to see that, despite having the advantage of an all-aluminium space-frame some 6.5kg lighter and 24 per cent stiffer than before, the weight of the new A8 in 4.2 TDI form has gone up 50kg over the previous car, making it 120kg heavier than the new (steel bodied) BMW 740d. Seems all that extra luxury has cost Audi extra weight but it does make the reduction in CO2 figures they’ve achieved more impressive. Prices start at £52,800 for the 3.0 TDI Quattro, rising to £59,500 for the 4.2 TDI and £61,500 for the 4.2 FSI, with UK deliveries starting in April 2010. The 3.0 TDI is expected to be the big seller, though, when it arrives later in September. Here in the UK, I suspect the new Jaguar XJ 3-litre diesel will give the new A8 a harder time than Audi might be expecting as, to my eyes, it looks better in the metal and should offer greater performance to boot. Should be a good twin test… Keep your eyes on evo.co.uk for news from the LA motor show