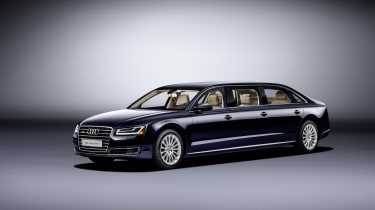 Images of Audi’s latest offering might suggest some kind of April Fool’s prank, like an M3 pickup or competitive MG sales figures, but the car you see before you – all 6.36 metres of it – is entirely real.

The Audi A8 L Extended is a built-to-order model to satisfy the demands of its European customer, for whom a regular A8 L is presumably two doors and two seats too short.

Such work is no mean feat, given the A8’s aluminium construction, and Audi has had to both lengthen and strengthen the structure with extruded aluminium sections, resulting in an additional 1.1 metres between the axles.

The roof too has been strengthened with aluminium tubes, while the rear bulkhead – now behind three rows of passengers – is double-skinned. Audi claims torsional rigidity almost on par with the regular A8 L. Despite the use of aluminium in the structure, the extra metal has made a significant contribution to an overall unladen weight of 2418kg. By contrast, the heaviest existing A8, the W12, tips the scales at 2075kg. 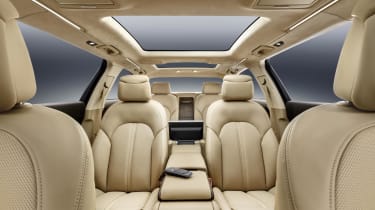 Where one might expect such a lengthy model to use the A8’s 4.2-litre V8 TDI engine or perhaps even the aforementioned 6.3-litre W12 of the range-topper, Audi’s customer has specified a 3-litre, TFSI petrol for the Extended model.

The unit develops 306bhp and 325lb ft of torque, sending power through an 8-speed tiptronic transmission and all wheel drive, for a resulting 7.1-second 0-62mph time.

Given such a choice, it’s safe to assume the owner intends for the car to be driven at a gentler pace, while its occupants enjoy a cabin upholstered in ‘velvet beige’ Valcona leather. The second and third row both feature electrically adjustable seats, and those in the back row also get an entertainment display and control of the cool box.

Perhaps unsurprisingly, Audi reports that it has already received further requests for the A8 L Extended, so although it’s not a full production model, we’re sure to see more VIPs being ferried about in six-door A8s in future. Cost is undisclosed, though it’s safe to assume a considerable six-figure sum to go with the six doors, six seats and six cylinders.