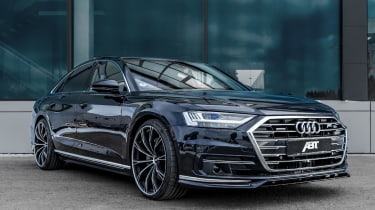 Audi’s all-new A8 is a rather demure piece of premium German metal, but if you wanted some added aggression for your large luxury saloon before the next S8 eventually shows its face, German tuner Abt Sportsline will be happy to oblige.

Using a 50TDi 3-litre V6 turbo-diesel as a base, Abt has lifted power over the standard model to 325bhp, with torque now rated at a punchy 479lb ft of torque. These represent useful 43bhp and 37lb ft jumps over the base car, all of which were generated from an ECU remap.

> Click here for more on the next Audi S8

The aesthetics have also been given a subtle once-over, with new clips (the sections right at the base of the standard bumpers and sills) attached to standard model’s front and rear bumpers, rather than Audi’s recently introduced A8 S-line. Abt has also fitted a small lip-spoiler and a set of 22-inch wheels from its catalogue. 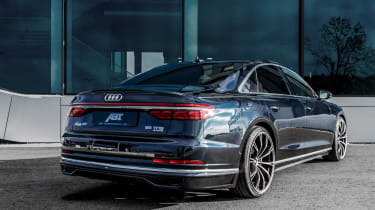 You might agree that this is one of Abt’s more discreet efforts and if you’re in the market for a hotter A8, you may well be better off waiting for Audi’s in-house job - the incoming S8. The car has been spotted putting plenty of miles in at the Nurburgring recently and has had a rather lengthy gestation period as a result of WLTP testing delays. When it does emerge officially, it should include a turbocharged V8 petrol engine and the usual S model aesthetic updates, including the ubiquitous quad exhausts.

For now though, Abt Sportline’s range of updated parts are available individually, or as packages to add some extra edge to the standard A8 diesel.