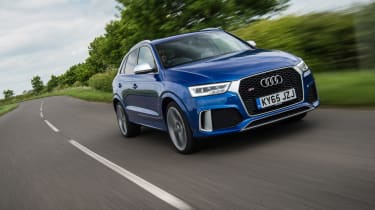 The Audi RS Q3 is the manufacturer's take on a high-performance version of an otherwise unremarkable compact crossover. R8 aside, recent RS models have been underwhelming, but in our first drive of the RS Q3 in October 2013, Richard Meaden used words like ‘enjoyable’ and ‘responsive’ to describe it, and topped it all off with four and a half stars - so there are high hopes for the latest model.

Under the bonnet there are noticeable improvements to the 2480cc five-pot, with hikes of 29bhp and 22lb ft compared to the old model. These take the totals up to 335bhp and 332lb ft, which is on a par with the 210kg heavier Porsche Macan S and the 145kg lighter Mercedes GLA45 AMG – both of which the pre-facelift Audi beat in our group test in evo 205.

What sets the Audi apart from its rivals is the character of its quintet of cylinders. As soon as you press the starter button the RS Q3’s engine has you a little bit smitten. The deep offbeat warble cavorting from the single oval tailpipe is just so much more engaging than a four-pot. After an exuberant initial rumble it actually settles to a very smooth and discreet idle.

The bare performance figures have improved over the pre-facelift RS - 0-62mph now takes 4.8 seconds, from a claimed 5.5sec before. Top speed remains limited to 155mph. Audi also offers an RS Q3 Performance, whose 2.5-litre engine gets a boost to 362bhp (at a slightly higher 5550rpm), while torque climbs to 343lb ft. These increases see the 0-62mph time drop to 4.4sec, though the same 155mph maximum is quoted. 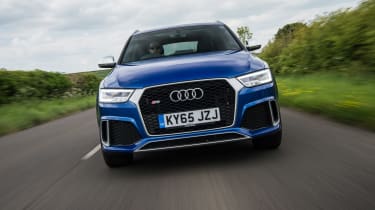 Perhaps of even more import than the power and torque hikes is the height of the driver’s seat. It’s now 15mm lower, which might not sound much but it’s enough to make you feel like you’re sitting in, not on the car. The rest of the interior is what you’d expect of an Audi in terms of quality and tactility and, though it lacks the draw of the TT’s new virtual dash, the centre console is angled a few degrees towards you, which gives a nice driver-focused feeling.

The roads around our test in Munich aren’t hugely inspiring, but an initial stroll down the Autobahn for a few junctions shows that everything is very stable and unflustered at speeds of up to 140mph.

Once off the ’Bahn I decide to ignore the rather dull Audi-prescribed route and head for the village of Wim because, well, why not? It turns out there are some decent roads on the way to Wim and the RS Q3 is startlingly fast down them. There’s the occasional heavy clunk from the (standard) seven-speed dual-clutch transmission when changing down at low speeds, but otherwise it’s swift and precise. The engine feels happiest if you change up at about 5500rpm so that you keep it constantly at its torquiest, although it will wind round to 7000rpm if the mood takes you.

> More: Read our review of the Audi RS3

In the corners there’s some roll and pitch, as you’d expect, but it’s well supported and this movement of mass means it’s easy to instil a bit of attitude into the car. The Haldex V four-wheel drive is as impressive as ever too, and punches the torque rearwards smartly so that you can genuinely adjust the balance of the car under power. Steering-wise, it would be nice to have a setting between the slightly too light Comfort and the more reassuring but slightly artificial Dynamic. However, it is pleasingly accurate and by no means bad. Even the new ‘wave’ brake discs on the front perform extremely well, with a decent amount of feel once you’re into the meat of the travel. 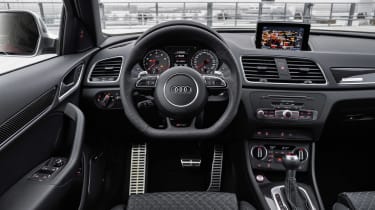 The closest competition for Audi's hot crossover are those from Porsche and Mercedes-Benz - the Porsche Macan S and Mercedes-AMG GLA 45. As hinted at above the RS Q3 managed to see off both in its previous incarnation and we'd expect a similar verdict with the latest RS Q3.

However, both rivals have their own appeal, with the Porsche the slightly larger, higher-quality and more refined of the trio and the Mercedes lighter, lower, nimbler and more intense. At £45,945 and £45,555 for the Porsche and Merc respectively, they're both cheaper than the Audi too, where previously Ingolstadt's entry had been the most affordable.

Mercedes' offering is the most powerful but thanks to the Audi's recent tweaks, it matches the AMG's 0-62mph sprint. In Performance trim the Audi is the quickest of the lot, but you do pay a fair premium for the extra. Still, you could spend that extra five grand quite easily in the Mercedes and Porsche showrooms without adding to the performance of either, so perhaps the comparison has merit.

Audi RS Q3 motoring has become a little more expensive than before, rising from £43,015 to £45,495 - a figure probably justified by the performance and styling improvements. Opt for the quicker RS Q3 Performance and that rises to £49,185.

Ultimately, you just have to suspend your disbelief with the RS Q3 and simply ask yourself whether you’re enjoying the experience. I certainly did, although I couldn’t help thinking that it would be even better if the whole package had a centre of gravity a bit nearer the ground, perhaps in a hatchback shape… Unfortunately, that car is the Audi RS3, and it's not quite the entertainer we were hoping for. The RS Q3 might actually be worth the extra five grand, in fact.