Audi Q5 review - Can it take on the rest of the crowded compact SUV sector? - Design 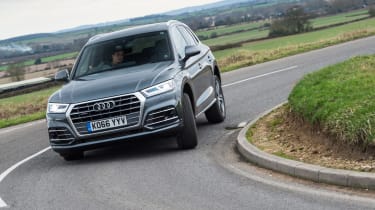 It’s important to understand the true reasoning behind the intention to buy premium SUV’s like the Q5, and despite the insinuation that owners have some sort of adventurous lifestyle, the reality is that cars like this sell on desirability.

So thanks to the huge success of the original Q5, Audi chose not to mess with the formula, keeping a similar boxy silhouette and wavy character line. Most will bemoan the lack of originality, but like the interior, the design does just enough to look fresh without a risk of dating. 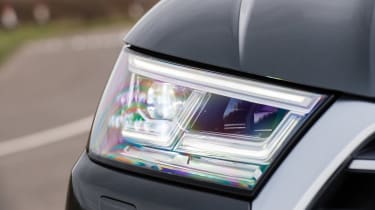 Like the previous Q5, the overall surfacing character is shared with the A5 coupe, here pinching between the wheel faces to create more of a muscular hip line in contrast to the boxier Q7. Also like the A5, Audi has given the Q5 a full clamshell bonnet to clean up the shut lines, and although most buyers won’t notice this little detail, it acts as an example of the sort of fine detailing that Audi is starting to master, even if it lacks any real impact for most buyers.

Audi’s blocky grill treatment from the Q7 also makes an appearance, although the smaller, sharper lighting graphics look better resolved than in its larger sibling. Bumper details and bright work all vary between models, but lighter, full body coloured cars do require large wheels to balance out the proportions. This is a detail accentuated by the Q5’s massive wheel arches, a notable detail carried over from the original car.

The SQ5 usefully adds some aggression the whole appearance with larger wheels and a more ornate grill treatment, but suffers from some pretty gaudy fake tail pipe extensions on the rear bumper. Overall the Q5 will be unlikely to attract that many glances at the school pick up, but in the context of its rivals sits somewhere between the boring new BMW X3 and still sharp Jaguar F-Pace in the style stakes.