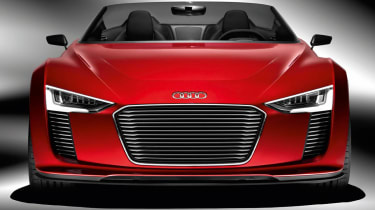 Audi has unveiled its latest e-tron concept. The e-tron Spyder is a plug-in hybrid take on the sports car, and follows on from the R8-derived e-tron from Frankfurt 2009, smaller ‘R4’ e-tron of Detroit 2010 and the e-tron Spyder which debuted at Paris 2010. In fact, this Spyder is near identical to the Paris show car, save for its newly acquired lick of red paint. It’s similar in size and style to the Porsche Boxster, but treads a different path when it comes to power.  A twin-turbocharged 3.0-litre TDI diesel engine sits in the middle of the car, driving the rear wheels. It serves up 296bhp and 479lb ft of torque, delivered via Audi’s seven-speed S-tronic auto gearbox. Two electric motors also power the front wheels, providing a combined 86bhp and 260lb ft. Front and rear powertrains can operate independently or in unison, the latter option making the e-tron Spyder four-wheel drive and resulting in a combined 382bhp and 739lb ft. That’s enough to see it complete 0-62mph in 4.4sec and hit an electronically limited 155mph. All four wheels can be accelerated and braked individually, aiding dynamics. Each front wheel has its own electric motor while the rear axle gets a mechanical sport differential. Audi dubs the approach e-quattro, a future interpretation of the firm’s famed quattro four-wheel-drive system. The new, red-hued Audi e-tron Spyder has been on display at the 2011 Consumer Electrics Show in Las Vegas, the firm showcasing its part-electric car alongside other technological advances of the moment. The original Audi e-tron electric supercar is expected to reach production in 2012.

Read about the original 'R8' e-tron