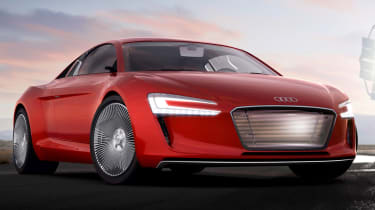 Audi has pulled off one of the shocks of the 2009 Frankfurt motor show with this, the E-tron. It’s an electric supercar that bears a pretty strong resemblance to the firm’s R8 sports coupe, and despite its alternative power source, its performance isn’t far off the more conventional car, either.

That’s thanks to four electric motors – two front and two rear, to give the E-tron a novel take on quattro all-wheel drive – which produce a total of 309bhp and 3319lb ft. While the former is over 100bhp off a V8-engined R8, the latter is a stonking ten times bigger than the petrol car’s torque output.

It’s unlikely to hit the road all at once, mind, with torque vectoring used to distribute grunt across the four electric motors and to each wheel as required. This aids the dynamics as well as acting as a safety system. The default power balance sees a 70/30 rearward bias, though, instilling a healthy dose of performance car into the E-tron.

Its suspension comes in the shape of triangular double wishbones at the front and trapezoidal wishbones rear, with a ‘taut setup’ for the springs and shock absorbers.

Performance figures aren’t quite a match for an eight-cylinder R8 – 0-62mph takes 0.2sec longer at 4.8sec, while the top speed is somewhat down at a limited 124mph (compared to 187mph). That’s all down to the complexities of electric power, as the two cars share near-identical dimensions and circa 1600kg kerb weights.

That’s quite an achievement for the E-tron, which has the handicap of a 470kg battery to contend with. It works around that with a host of weight-saving technology. The car’s main aluminium space frame structure is covered in carbonfibre-reinforced plastic body panels, to couple rigidity with low weight. It’s a concept that’ll soon filter down to Audi’s regular production range, apparently.

Aerodynamic technology features heavily, too, with the car’s main air intakes – positioned either side of the front grille and ahead of the rear wheels – opening and closing as required, meaning they can be closed flush under most circumstances to provide a lower, slipperier and more efficient drag coefficient.

The battery is placed in front of the rear axle, with the aim of giving the E-tron the dynamics of a mid-engined sports car, and is partly responsible for a 48/52 front/rear weight distribution. It’s a water-cooled item and Audi claims a 154-mile average range, with a full charge taking 6-8 hours from a normal household socket. The ceramic brake discs can also provide regenerative braking energy, too, with brake-by-wire technology maximising the amount that can be recuperated.

Audi admits that electric cars are still seen as outsiders, but is ploughing a load of money into an ‘e-performance support project’, starting in October, to help develop no-compromise electric drive systems. The E-tron is a rather exciting opening for the project, with every element of it designed to optimise the performance of its electric components.

The Frankfurt motor show is the place to see the Audi E-tron in person, and is open until September 27. You can view the rest of evo's Frankfurt coverage here. Audi also unveiled its striking R8 Spyder and new S5 Sportback.