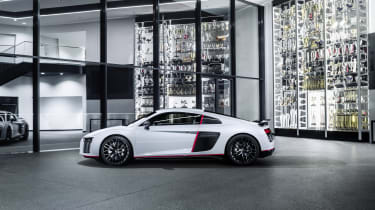 Think of Audi and 24 hour races and you tend to think of the LMP1 prototypes. Not surprising really, as they have taken 13 of the last 16 overall wins at Le Mans. But the R8 road car has also spawned a very successful racing car in the GT classes. Since it first took to the track in 2009, the R8 LMS GT3 has won over 300 races – 323 to be exact – in destinations as far flung as Dubai, Zolder and Daytona (although, ironically, not Le Mans, where an Audi R8 has never been entered as GT3 cars aren’t allowed). The new model has continued the success, taking its maiden win in its first ever race, at the Nurburgring 24hr last year.

To celebrate all this, Audi has launched a special edition of the road-going R8, called the ‘selection 24h’. It is essentially a top spec 602bhp R8 V10 Plus, with most of the option boxes ticked, but it also gets a special livery to ape that of the LMS race cars. The main body of the car is Suzuka Grey, with Mythos Black and Misano Red highlights picking out various details like the leading edge of the side blades.

There are a couple of notable lighting options, the first being the far-reaching laser headlights that we first tried in the R8 LMX. The second is slightly less useful, but quite fun: The entry lights on the doors project the Audi R8 logo onto the road surface, presumably in a similar fashion to the way the new Ford Mustang’s puddle lighting projects an image of a Mustang (the horse not the car) onto the tarmac. In the future, Audi R8 customers will be able to choose from a near unlimited range of lettering and logos for similar projection. 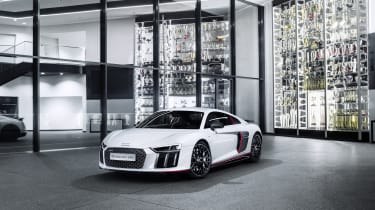 There is plenty of gloss finish carbonfibre adorning the cabin. On the CFRP surround for the virtual cockpit (Audi’s entirely digital instrument binnacle) you will also find a matt-finish ‘R8 24hr’ logo, while the gloss carbon fibre sills will feature a serial number from 1 to 24 for each of the (very) limited edition cars. On the exterior, you will also be able to identify a ‘selection 24h’ car by its gloss black 20-inch 10spoke Y design wheels and the black trims on the exhaust tail pipes.

As yet no price has been confirmed in the UK, but in Germany it will cost 229,000Euros. The first time that people will be able to see the Audi R8 ‘selection 24h’ is in the paddock at the Nurburgring 24hrs at the end of May, where the new LMS race car will be looking to keep up a 100 per cent winning record. Of course it’ll have to beat our own Jethro Bovingdon in the SCG P4/5 Competizione…