The new Audi R8 LMX is the most powerful R8 yet, and it beats the BMW i8 to production laser headlights 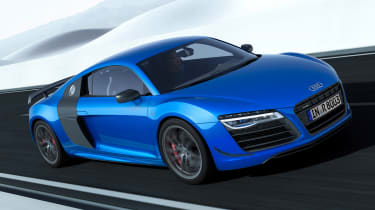 Audi has revealed its new limited edition R8. The Audi R8 LMX is significant for not only being the most powerful production R8 yet, but the first road-going car with laser headlights. The BMW i8 uses them also, but Audi has gazumped its German rivals by releasing the R8 weeks before the petrol-electric supercar makes it into showrooms.

A slightly meaningless victory, perhaps, but there is more to this R8 than laser high-beam lighting borrowed from this year’s R18 e-tron quattro Le Mans racecar. With a 562bhp tune of the more potent R8’s 5.2-litre V10 naturally aspirated engine, it betters both the current range-topping R8 Plus and the 2010 R8 GT special. Its 198mph top speed is identical, though its 3.4sec 0-60 time is a notable improvement – especially given how pessimistic some of Audi’s performance claims have proved in the past. Audi’s seven-speed S-tronic twin-clutch paddleshift transmission is standard fit.

The light emitted by those lasers – twice as strong as the illumination provided by all-LED headlights – is blue-tinged, inspiring the colour scheme of the first R8 LMX we’ve seen, with ‘Ara Blue’ paint on the outside and blue accents and stitching inside. Exterior styling accoutrements comprise a fixed rear spoiler and a host of carbonfibre-reinforced plastic elements, including front splitter, dive planes, signature side blades and engine cover.

And if you’re concerned about blinding pedestrians and other road users, the laser technology activates at 37mph and uses a computerised sensor to detect oncoming cars and then adjust the light beam accordingly.