evo races an Audi R8 LMS at the Nurburgring

John Barker is racing at the Nurburgring 24 hours again. This time in one of the race's quickest cars, the Audi R8 LMS 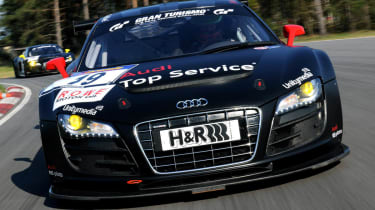 It feels like I have wandered onto the set of the latest Carlsberg commercial. I keep expecting a voice as deep and rich as pipe tobacco to say ‘Carlsberg don’t do customer drives at the Nurburgring 24 hours, but if they did, they’d probably look like this…’

Several evo writers are racing at the 2011 Nurburgring 24 hours, and you can follow all of their progress on evo.co.uk, including race coverage on June 25-26

John races a Volkswagen Scirocco at the Ring 24 hours

Read about the 2010 Nurburgring 24 hour race