Audi's drop-top R8 supercar is snapped at the Nurburgring in 5.2-litre V10 form 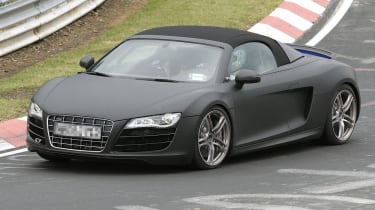 Audi’s R8 Spider has been spied out testing. It’s essentially just a roadster version of the rather brilliant R8 coupe, but there’ll be differences to set the two apart.

The biggest of these, of course, is the soft-top roof. Just like its cousin, the Lamborghini Gallardo Spyder, the R8 forgoes a folding metal roof to avoid ungainly proportions and to save weight and keep the centre of gravity low.

On top of this, the R8’s signature sideblades are missing too. This is likely a cost of chopping the roof, but it also goes someway to separate the coupe and convertible R8 variants further.

While Audi is expected to launch the V8-powered R8 Spider at September’s Frankfurt motor show, the car snapped here appears to be the 5.2-litre V10 version, with rear-end detailing to match that of the recently-launched V10 coupe. Note the round, singular tailpipes on each side, rear diffuser and gloss black trim stretching the width of the rear.

The car was caught testing at the Nürburgring, Audi no doubt fine-tuning suspension and handling to make sure the chopped roof doesn’t affect the R8’s dynamics too much.